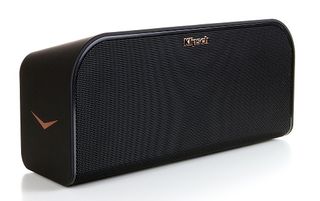 Klipsch has announced the release of its Klipsch Music Center KMC 3, the brand's first ever wireless Bluetooth speaker.

Part of the new Klipsch Music Center series, the KMC 3 is designed to commemorate the brand's partnership with Live Nation Entertainment.

Available in black or white, the KMC 3 was released in June of this year and is available to buy for roughly £345.

The portable 2.1 system comes fitted with dual 2-inch, full-range drivers and a built in 5.25-inch subwoofer, designed to, in Kilpsch's words, "take the concert anywhere".

The KPC 3 is designed to keep tablets and smartphones charged via a USB input and is capable of playing any non-Bluetooth music source through its 3.5mm input.

What's more, it has been designed to remember the previous eight devices that have been connected, enabling a speedy reconnection when necessary.

"This product launch is extremely important given it's connection to our commitment with live music," said Pail Jones, CEO of Klipsch.

"With the KMC 3 representing our first Bluetooth speaker, we're eager to diversify our future offerings in the wireless audio category."

The news comes shortly after the speaker manufacturer announced the release of its S3m headphones, offering its listeners a single-button remote for control of playlists and phone calls.

Available in black, white, blue, red or jade, the S3m's are on sale for around £40 from the company's website.

Furthermore, the Klipsch Music Center Stadium is expected to join the series later this summer, with additional systems being introduced throughout 2013 and 2014.