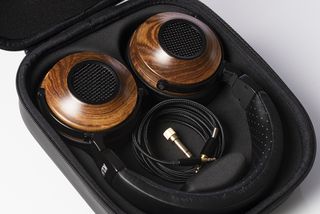 The new KLH Ultimate One headphones feature real ebony wood earcups and 50mm beryllium drivers, the latter boasting a claimed frequency response of 18Hz-22KHz and a sensitivity rating of 97 dB.

The headphones feature a hand-stitched headband and earpads made of premium grade leather supported by dual-layer memory foam. You'll get a 2-metre, detachable cable, which is handy, and they come with a pure silver-litz braided cable with a 3.5mm jack. There's an adapter, too. There's a hard-sided black leather travel case and a velour bag, too.

And what better way to get a new pair of good-looking headphones out there than by handing them out to 90 of the youngest and most beautiful jet-setters to grace our silver screens? KLH did just that, adding its first headphones to gift bags at the MTV Movie and TV Awards on Monday night in Santa Monica, California. Albeit, probably with a whole host of other headphones (we wouldn't know, naturally).

For us mere mortals, the KLH Ultimate One headphones are priced at $299 and information on where to purchase a pair can be found on the KLH website.

Alongside its new headphones, KLH launched a fresh range of floor and standmount speakers earlier in the year, with all models named after the birthplace of KLH: Cambridge, Massachusetts. As far as we know, there isn't a US town called Ultimate One...