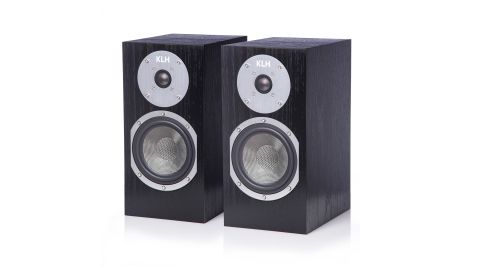 The KLH Albanys are compact and punchy newcomers, capable even of challenging class leaders – but they need work

If you’ve never heard of US-based audio pioneers KLH, you’re not alone. Despite being big in the early 1960s, shifting up to 30,000 loudspeakers per year, few on these shores had heard of the company, until the former president of Klipsch bought it in 2017.

Since then, KLH has developed a new range, comprising standmounts, surrounds, subwoofers and floor-standing speakers – all named after Boston streets. So here we have the Albany bookshelf speakers, the marginally bigger of two standmounters within the 12-strong range.

Roughly the size of a shoebox, each speaker has a reassuring 5kg weight. The Albanys are well-built and finished to an impressive standard, our review sample comes in a smart black veneer, but they are also available in walnut. It’s a two-way design, featuring an anodised 25mm aluminium dome tweeter and relatively small 101mm woven Kevlar mid/bass driver.

Visually, the first thing of note is that there’s no reflex port, which is rather unusual. It’s a surprise not to find one here, as most of the competition uses the port to supplement the bass. However, KLH specialises in getting results from smaller, sealed cabinets, the benefits of which tend to be better grip and agility.

KLH suggests that the Albanys should be placed at least 30cm from a wall. We play around with placement, and in our test room they sound best when placed a little closer, at around 12cm from the rear wall.

We carry out our test with the Albanys plugged into our reference Naim/GamuT system, though more likely partners at this level would be the Award-winning Marantz PM6006 UK Edition integrated amplifier and 6006 CD player, at £299 each.

We run the Albanys in for almost 48 hours to eliminate any initial box freshness and the hard edge that goes with it, though KLH itself recommends 25 hours. Despite being labelled bookshelf speakers, the Albanys need suitably solid stands to position them at roughly ear level.

Our initial impression of the Albanys’ performance is of a clear, perky and forward-facing sound. Kate Bush’s ebullient vocal slashes keenly through the tinkling jaggedness of shattering glass in Babooshka.

Mid-range, percussive guitar riffs and keys are also competently handled. The sparky drum fill at the top of Melissa Etheridge’s I Wanna Come Over does exactly that as we note that nothing’s out of place in a fast, punchy and notably lag-free mix.

They’re nice and tight through the deeper tones, with notes beginning and ending well, but there’s little of the expected weight or authority. Even from a speaker of this size, we’d expect more vigour and spirit through the bass – more snap down into the soles of our boots.

We sample The John Dunbar Theme from John Barry’s Dances With Wolves soundtrack, and while things hang together well – there’s admirable clarity within the strings – the lilting, rumbling orchestral build that puts us in mind of the haunting expanse of the prairies and Dunbar’s long journey from Fort Hayes to Fort Sedgwick is absent.

Our main issue here is balance. The emphasis is on the higher frequencies, which presents a problem. Though initially pleasing, increasing the volume to find a deeper, fuller, more animated bass makes the treble become edgy and slightly coarse.

The upshot of concentrating heavily on delivering coherence through the upper register is a thinner and more piercing sound overall, which needs fleshing out at the bottom.

It goes without saying that we can’t expect a model of such compact proportions to rival the likes of its far bigger and brawnier alternatives in terms of delivering a weighty bass.

But for all their chirpiness, pop and response, issues with the forward treble and lack of bass authority mean that the Albanys fall short of class leaders such as the similarly priced B&W 607s.