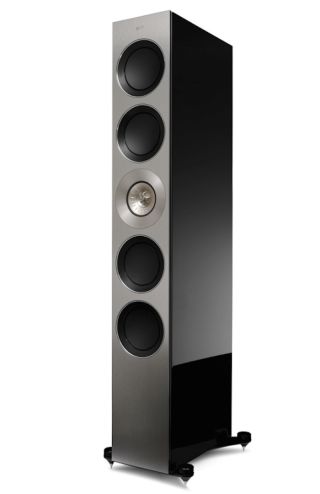 The company modified a pair of KEF Reference 5 speakers (pictured) for active operation by bypassing the internal passive crossover, allowing the individual low, mid and high frequency sections to be driven directly by separate power amplifiers fed with signals from the digital crossover in the Linn Akurate Exaktbox.

“This crossover uses the powerful processing engine in the Linn Exaktbox to eliminate the phase non-linearity of the passive crossover and the aggregate output of the drive units, ensuring all frequencies are time-aligned,” says KEF.

The result, says KEF, is “a level of sonic performance not possible before. Until now it hasn’t been possible to create the loudspeaker designer’s ‘holy grail’ - the full bandwidth phase linear point source, dealing with the bass as well as the mid and high frequency region.”

Linn describes its Exakt technology as “the most direct connection that’s ever been made between the artist and the listener”. Exakt keeps your music in the digital domain for as long as possible, to avoid any degradation caused by signal processing, and takes care of the digital-to-analogue conversion itself. It aims to eliminate magnitude and phase distortions caused by the crossover, drive units and speaker enclosure.