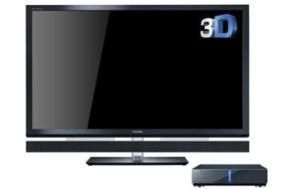 They're expected to launch on the domestic market in October, at prices expected to start from around Y600,000 (£4400).

The Cell Regza TV was launched at last year's CEATEC show in Japan, and as well as facilitating 3D viewing from Blu-ray, its use of a high-speed, high-capacity processor allows 3D Super Resolution Technology, upscaling the separate 3D images used in 'side-by-side' broadcast TV to near-high-definiton quality.

It also gives 2D3D Conversion, allowing standard TV to be turned into 3D on the fly, which 'allocates depth by capturing the characteristic of the input image and by detecting and recognising vectors of movement of several objects.'

In addition it allows multiple channels to be viewed in real time on the screen for channel-hopping, and can record up to eight channels simultaneously onto its 3TB of built-in storage, 2TB of which is set aside for constantly-running 'time machine' operation. In addition, up to eight USB hard-drives can be connected to add storage capacity.

The TVs combine a Mega LCD panel with high-luminance local-dimming LED backlighting to give a 9,000,000:1 dynamic contrast ratio, while ClearScan 240 uses four-times scanning to improve the handling of fast action.

The company says that 'For overseas markets, LCD TVs that build on the Cell Regza concept and that meet market demands in the U.S. and Europe will be rolled out in due course.'