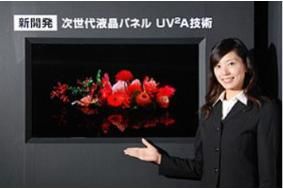 The company also sees its UV2A – Ultraviolet-induced Multi-domain Vertical Alignment – technology as an essential building-block for a new generation of screens ready to handle not only the demands of 3D TV, but also future 4Kx2K Super HD displays.

At the heart of the technology is a new photo-alignment technique, providing highly accurate control over the alignment of the liquid crystal molecules, using a special material responding to ultraviolet light.

The major advantage here is the accuracy with which the liquid crystal molecules can be aligned: Sharp says it's moved beyond its previous nanotechnology into picotechnology, allowing the tilt angle of the molecules, which are around a couple of billionths of a metre in diameter, to be controlled to within trillionths of a metre.

The benefits include:
– A high contrast ratio of 5000:1 – some 60% greater than that of conventional panels – to give deeper blacks and eliminate backlight bleed problems
– Higher optical efficiency to reduce energy consumption (the aperture ratio is 20% greater than conventional panels', and so needs less backlight brightness)
– And a response time twice as fast as current models.

Sharp will be introducing this technology across the board for panels to be produced at two of its plants in Japan – the new LCD panel plant in Sakai and at Kameyama Plant No. 2.

The company displayed its first prototype 4Kx2K LCD panel, a 60in model with 4096x2160-pixel resolution, some three years back. 4Kx2K is the proposed Super HDTV, or 'Super Hi-Vision', system under development by electronics companies including JVC, Panasonic, Sharp and Sony, and broadcasters led by Japan's NHK and the BBC.