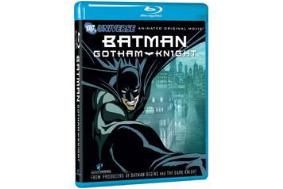 Naturally there's no HD DVD to worry about this year at IFA in Berlin, but it was clear that amongst the glad-handing and back-patting there was a realisation that plenty of work to be done before Blu-ray really takes Europe by storm.

Frank Simonis, the chairman of the Blu-ray Disc Association, began by outlining the format's achievements: the standardisation of disc sizes, in 25GB and 50GB form, the addition of BD-Live and bonusview content and a claimed average bitrate of 44mbs being the highlights.

Trotting through some sales figures, the headline figure claimed some 1.5m players have been shipped in the first quarter of this year, already more than the 1m that were sold in the whole of last year. BDdrives, PCs and recorders have also seen sales doublein Q1 compared to last year.

Blockbusters sell best on Blu-ray
Moving on to disc sales, and figures show sales since inception have topped 15 million in the US, 5m in Europe and 1.5m in Japan. Simonis made it clear that spikes in sales show new, blockbuster titles are crucial to BD sales, with back catalogue releases having much less impact on average.

The film houses each had representatives here to speak, and while most talked about imminent new releases and the increasing use of BD-Live on discs - read more about this on the site today - Monica Juniel, vice-president of marketing for Warner Home Video spoke about the changes required to push Blu-ray to the next level.

Juniel spoke of the need for more BD hardware and at cheaper prices, increasing familiarity with consumers – many of whom are stuck at the 'awareness' stage but still didn't really understand the format – and of fuelling software purchases amongst PS3 owners.

Interestingly she highlighted a correlation between the PS3 AV remote and disc purchases, saying research showed that those who had the remote bought five rather than two BD discs annually. A hint of chicken and egg here perhaps, but interesting nonetheless.

The conference ended with some more sales figures from Futuresource Consulting, which highlighted the gap between HD off-air broadcasts and HD TVs in homes. While 33 per cent of homes in Europe have an HD-Ready TV, only 2 per cent have access to HD broadcasts - this compares to 65 per cent and 33 per cent respectively in the US.

Undoubtedly there's still plenty of work to do for Blu-ray, but with some exciting new releases on the horizon, the BDA was still conviced the future would be bright, and Blu.