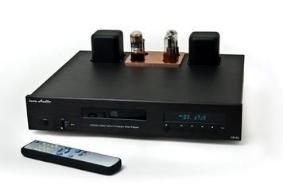 The CDX1 is designed by Icon Audio's founder, David Shaw. The digital and analogue sections are separated from each other, with the analogue valve section having a dedicated power supply with valve regulation and valve rectification.

The output valves are the 'legendary' 6SN7, while the digital section features a 192kHz, 24-bit upsampling DAC for high resolution. Two digital inputs (one optical, one coaxial) are included for connecting external devices.

Two versions of the CDX1 are available: the standard model costs £999.95, while a David Shaw Signature version with Jensen copper foil oil paper capacitors and premium valves is available for £1349.95.

Joining these will be the Stereo 25 MkII, an upgrade to the entry-level model, featuring an internal headphone amp, valve rectification and tertiary output transformers.

Finally, Icon is working on the MB805, a reference standard, single-ended monobloc generating an output of 45W RMS. It will go on sale later this year.