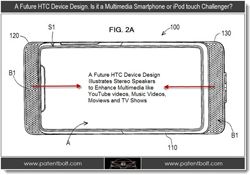 Plans uncovered by the site Patent Bolt point towards a new HTC device that isn't a smartphone but instead focuses on sound and video.

There's a stereo speaker design for getting the most out of music, plus a kick-stand for watching video.

The device would use the Android OS in order to browse the web and access Android apps and download services via the Google Play store.

Google Play is the new name for the Android Market, Google's iTunes rival and home for apps, music and movies.

Google of course owns YouTube, too, which means it has plenty of reason to get a portable device in your hands for watching video and enjoying music.

HTC has previously only concerned itself with smartphones. The company recently bought a stake in Beats Electronics, known for Beats by Dr. Dre headphones, giving the brand an audio focus.

While we've been underwhelmed by Beats by Dr. Dre phones such as the Sensation XE, a Beats-powered multimedia player would surely hold plenty of consumer appeal.

Despite the appeal of do-it-all smartphones, the iPod Touch still sold over 11m devices in the last three months of 2011.

On the subject of HTC smartphones, we'll be taking a look at the new, top-of-the-range HTC phone, the HTC One X with aptX Bluetooth and a quad core processor, very soon. Look out for the review.