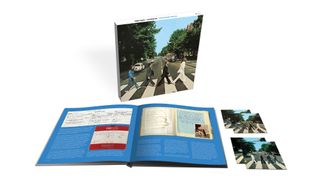 A 50th anniversary edition of Abbey Road, The Beatles' penultimate album, will be released next month, with its 17 tracks mixed in stereo, hi-res stereo, 5.1 surround and Dolby Atmos.

The Super Deluxe box set, produced by Giles Martin and mix engineer Steve Okell, also includes 23 session recordings and demos, most of which are previously unreleased.

This is the first time the album – the last to be recorded together by the band – has been remixed and packaged with additional tracks. It'll comprise four discs: three CDs and one Blu-ray, the latter being where you'll find the mixes in Dolby Atmos, 96kHz/24-bit hi-res stereo and 96kHz/24-bit DTS-HD Master Audio 5.1.

"The Beatles recording journey had gone through many twists and turns, learning curves and thrilling rides," says Paul McCartney in his foreword for the package. "Here we are – still wondering at the magic of it all."

The 50th anniversary Abbey Road box set will be released on 27th September, and you can pre-order yours here.