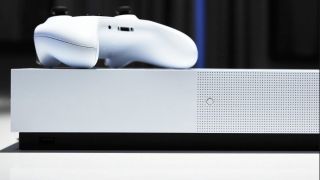 Microsoft is reportedly gearing up to launch the 'Xbox One S All-Digital Edition’ in May, according to Windows Central sources.

The new console would be the first to ditch the disc drive, meaning owners would rely entirely on digital game purchases. That would obviously mean no 4K Blu-ray player too. Whether it would carry over 4K video streaming and upscaling from the Xbox One S is still unknown.

The disc-less console would no doubt open doors for Microsoft to further push its Xbox Game Pass, which gives subscribers of the £7.99/month plan unlimited access to over 100 Xbox One and Xbox 360 games on Xbox One, as well as the forthcoming cloud-based Project xCloud game streaming service it announced last October.

Allegedly the Xbox One S All-Digital Edition would launch globally in May, with pre-orders starting next month. Naturally, we’d hope a console with fewer features would have a cheaper, perhaps sub-£150 price attached to it. After all, the Xbox One S is currently £179.