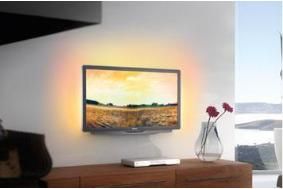 See our extended blog with more details and pictures of the entire Philips 2010 range.

More workshops! SoundSphere speakers intended to create a "diffuse, room-filling sound". Not sure what that does to stereo imaging.

New '360 Sound' satellite speakers for home cinema also intended to create a diffuse sound (spot the theme developing here?). They use two tiny satellite speakers, one on top of a second dipole one (think Bose) to fill out the soundfield. Philips claims it makes a 5.1 soundtrack sound more like 7.1.

OK folks, signing off now. Come back to the site tomorrow morning for our blog with full tech specs and pictures of all the new Philips 2010 TV range.

And there's a neat new stand design – a pedestal stand that also doubles as a wall-mount.

Here's a picture of backlighting on the new sets – from bottom to top: CCFL; direct LED; edge-lit LED; and direct LED with local dimming.

Now in the TV workshop. Wall-adaptive Ambilight means you don't need to place your Philips TV against a white wall – the TV adapts its light output to the colour of your room. Very clever.

And each series in the 2010 TV range gets its own sound system 'match'.

Workshops scheduled to go on until 8pm tonight! We'll bring you more pictures and tech specs as the evening progresses.

All new Philips home cinema products will be launched in May. TVs not expected until the second quarter of this year at the earliest. Check out our picture of the new 'immersive' home cinema systems with 360 degree sound.

Launching in April 2010, Philips Net TV will offer video-on-demand in HD and SD using a regular interconnect connection. Philips has announced partnerships with broadcasters in other European countries, but not yet UK. Net TV will also give free access to popular sites such as YouTube and eBay.

Ooh, this looks good: a new Blu-ray Soundbar with 'Ambisound'. DLNA-enabled to stream content from your PC, and Net TV compatible. Pic here.

All new Philips TVs and home cinema systems share a single, simplified remote control. The 9000 TVs have integrated wi-fi, 7000 and 8000 models acces Net TV via a wireless USB dongle. All have an Ethernet connection too.

SoundSphere micro systems feature a tweeter housing projected above and forward of the mid/bass driver. New Philips Fidelio iPod dock looks really interesting – clearly intended as a B&W Zeppelin rival. You can see it here. On sale May, price to follow.

And Philips Songbird is a very iTunes-like PC media library app. Picture here. It's an open app for Mac and PC. Supports Flickr, Twitter. You can use it to book gig tickets from an artist search. Available April.

The 9000 and 8000 3D LED TVs will use active 3D technology, but you'll need to buy an add-on 3D pack. This consists of a wireless transmitter and two pairs of active shutter glasses.

No price as yet, but Philips believes consumers buying a new telly "should not have to pay a premium for a technology that will become an industry standard in the coming years". So that's why it's making the 3D pack optional.

At last – some product information! The big news to kick off with is that Philips is launching new 7000, 8000 and flagship 9000 series TVs.

The 2010 9000 LED series and 8000 LED series TVs will be 'Full HD 3D Ready'. This means they can use active 3D technology, but you'll need to buy a 3D add-on pack consisting of a wireless transmitter and two pairs of active shutter 3D glasses before you can enjoy 3D on them.

Philips says this is to prevent consumers from having to pay a premium for 3D in the first instance.

The 9000 series will come in 32in, 40in and 46in sets, as well as a flagship Cinema 21:9 super widescreen version. All will be 3D ready. The 32in set will arrive in the UK in the second quarter of this year, but you'll have to wait for quarter three for the other sets in the flagship range.

The (also 3D-ready) 8000 range and the more mid-priced 7000 range will arrive in quarter two. Unfortunately, Philips is unable to give us pricing details yet, but we will be sure to update you as soon as they do.

Breaking for coffee now. Product workshops begin in an hour, so we should get more specific details of the new TVs, Blu-ray players and AV systems then. We'll post additional info as soon as we get it.

Kaye: "It's up to consumers to decide how much quality they will pursue, and up to all of us to explain it to them."

Vaartjes: "An important trend will be 'media management' – so people have easy access to a wealth of content." Kaye: "Consumers want content on any device. We have to make sure there are no barriers."

"We don't believe in integrating hard-disk drives in TV sets. People will connect storage devices to TVs in a different way, externally."

OK, plenty of philosophising but can we have some more technical details on TVs, Blu-ray players, soundbars and the like please.

"3D television is the logical next step. But we have to stress the quality. 3D can also be a very positive influence on the development of Blu-ray."

Mmm, looks like Philips has more than changed its mind on that subject then. Remember what they said last year? Here's a reminder: "We believe consumers are not yet demanding 3D TV at home, as the technology is still developing, is complex to implement and is still relatively expensive."

So to what extent is the development of 3D tied to Blu-ray? "They are very well suited. With the coming of 3D TV, Blu-ray will still be around in 2020," says the panel.

Panel discussion between Wiebo Vaartjes and Pieter Vervoort of Philips and Danny Kaye. Vaartjes says of Blu-ray: "There's an increasing idea that quality is important, and that has developed hand-in-hand with HDTV."

Danny Kaye: "Blu-ray has been more of a success than many admit. In tough economic times, it's been widely adopted."

Veervort: "Consumers are ready for video distribution over the internet." But Kaye says "physical and electronic distribution will co-exist".

Hang on, now they're talking about hair removal products! What happened to the new TV range?

Ah, good, next up Danny Kaye of 20th Century Fox on "The Future of Home Entertainment". That's more like it. Watching a promo video extolling the virtues of Blu-ray. Preaching to the converted, perhaps?

Talk of eco-friendly products, with Philips claiming that 30 per cent of its sales now come from 'green' products. By the end of this year the company says it will have invested more than 1 billion Euros in eco models.

So it looks as if last year's decision to abandon development of 3D TVs was short lived. The power of market forces, eh?

Listening to intro on the Philips theme of "sense and simplicity". Surrounded by a huge array of 21:9 widescreen TVs, as you can see here.

New range of MP3 players include a Philips Activa model for jogging, which picks a tune from your library that is the same tempo as your running speed. Then it speeds things up to encourage you to run faster. The cheek!

Press conference just about to begin. Have an effective wi-fi link, which is a triumph in itself. The rumours are of three new TV ranges, two of which could be 3D. Plus a new 21:9 TV and audio systems with "interesting" speakers.

We're in Barcelona today, reporting live from the Philips 2010 product launch. The official press conference is due to start at 2pm, so we'll bring you regular updates throughout the afternoon here on whathifi.com. And don't forget you can follow all the latest developments on our Twitter page too.

We'll be intrigued to find out what Philips plans to do about 3D TV, having abandoned its 3D TV development in April last year. Will it be in a position to play catch-up with Samsung, Sony and Panasonic, or will it ignore the 3D market altogether?

And having won our TV Product of the Year Award last year with its 42PFL9664 model, will the company continue its run of class-leading LCD screens in 2010?

Keep checking back here on whathifi.com for all the details.