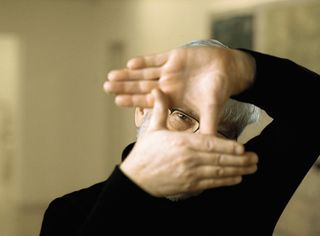 The death has been announced of the British industrial designer David Lewis, who over almost half a century shaped the design of one of the most iconic brands in consumer electronics, Bang & Olufsen.

Born in London in 1939, David Lewis trained at the Central School of Art from 1957 to 1960, and lived in Denmark since the mid-1960s, moving there when he was first employed as a freelance by two of B&O's former designers, Jacob Jensen and Henning Moldenhawer.

He worked on the design of products for B&O while employed by Jensen and Moldenhawer, starting his own studio in the early 1970s.

In 2001 he was given the title of Royal Designer for Industry by the Royal Society for the Encouragement of Arts, Manufactures and Commerce, to add to the many Danish and international prizes and honours he received during his career.

These include the Danish Design Council's annual award in 2003, and the title of Knight of the Order of the Danneborg, an honour bestowed personally by the Queen of Denmark on those who have made a special contribution to Danish interests.

Speaking of his British honour, Lewis said that 'Having lived more than 35 years in Denmark, it is a recognition from the Royal Society that I am proud of.'

In his many years working with Bang & Olufsen, including three decades as the company's Chief Designer, Lewis was responsible for the design of many of its best-known products, from systems and loudspeakers to televisions and telephones.

Among many other designs, he and his studio were responsible for the six-disc changer of the BeoSound 9000, the sliding doors of the BeoSystem 2500, which opened as the hand approached, the Beolab 5 speakers, with their stacked acoustic lenses, and the curvaceous BeoCom2 telephone handset.

And the attention to detail in these products is incredible, extending to the phone having a ringtone composed by Danish composer Kenneth Knudsen, inspired by the sound of the raw aluminium casting used for its body being dropped on a hard surface.

Lewis carried on and developed the work of early designers such as Jensen, leading Bang & Olufsen away from the age of wooden finishes and black boxes, and into the current style of glass, aluminium and high-quality anodised finishes.

He said in an interview that 'Our BeoLab range of loudspeakers is a revolt against indifference and heavy wooden boxes humming away in the corners of our homes, dictating the furnishings and the way we live,' and that he wanted to design TVs able to 'vanish' when not in use - 'A TV without a picture is definitely not a plus when it comes to interior design.'

Lewis preferred to draw by hand rather than using computers, which he viewed as 'Too inhibiting, too complicated to work with' – a mantra he extended to his dislike of gadgetry and preference for clean, simple, functional design. 'People have been led to believe that high quality is synonymous with gadgetry and complexity,' he said, 'I believe that the less you complicate things, the more interesting people will find them.

'Let's clean up and simplify the technological mess. Let's go back to original ideas. Let's do it the Bang & Olufsen way.'

Neither was he a great fan of the kind of styling seen in the likes of Braun and Porsche Design products: 'The Germans introduced matt black in the '60s and made some wonderful stuff, but the industry has been following blindly ever since. Today, you can hardly tell whether you're looking at a toaster or a typewriter.'

Lewis was much more interested in making products people want to look at: 'Who says a loudspeaker should be hidden away in the dark, if it sounds better the closer it is to you?

'BeoLab speakers have been shaped to stand out from your furniture and to blend in with it. That's why we use polished aluminium which takes its colour from its surroundings instead of dictating to them.'

And when it came to translating his initial sketches into product concepts, Lewis still didn't resort to computers; instead he would work with pieces of cardboard, constructing three-dimensional models to see how the finished product would look.

He was a great believer that technology should serve the user, rather than the consumer having to learn how to come to terms with the latest gadgets and gizmos, and that products should have long replacement cycles, rather than being obsolete almost as soon as they're launched.

'What makes Bang & Olufsen something special is that here the concepts must last at least ten years. They wouldn’t be able to do that without content, function and design which lasts the distance.'

As well as his best-known work for B&O, Lewis also designed for companies including Electrolux and Asus: his thinking is clear in the style of the Asus NX90 multimedia computer (above), and in the Asus WX-DL David Lewis mouse (below).

Asus says that 'Mr. Lewis put great stock in clean, modern, and powerful creations that were often described as “Nordic”. While understanding the importance of function, Mr. Lewis also had a highly adventurous side that pioneered previously-unseen shapes and concepts, resulting in actual products that pushed the boundaries of what could be achieved in trailblazing design while retaining user comfort.'

Writing on behalf of his colleagues in the David Lewis Designers Studio, Torsten Valeur said that 'After a short period of illness David Lewis died peacefully on November 8, surrounded by his family. His mind was so fresh and full of zest for everything he was doing, therefore it is impossible for us to comprehend and accept that he has suddenly passed away.

'David was the man of the studio and he still is. He was always very involved in our projects with its own all-natural sparkling creativity and dynamism. He could turn things upside down and chase the yet unseen solution.

'He came with an ever-youthful desire to change the conventions and try new ways to the very end of a design process. He never asked "why" but always "why not".'