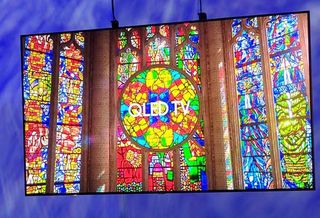 The first day of CES is given over to CES Unveiled, which highlights some of the most exciting tech to be showcased in the coming week. It's always a great glimpse of what's to come, and this year was no different - we saw TVs aplenty, soundbars, headphones and more.

And these were no bit-part players, either - the likes of Samsung, LG, Panasonic and Shure all had announcements to make. So what do these big hitters have in store for 2017? Read on and find out.

Samsung confirmed it was working on QLED TVs, and now it's made good on its word by launching its first three ranges. The flat Q9 and Q7, and curved Q8, all use the new technology in an effort to deliver optimal brightness and power efficiency, and all in a set no thicker than an OLED screen. They all come with 4K and HDR support, too. The all important pricing and release dates are yet to be confirmed, but hey, that's what CES day two is for!

Samsung wasn't the only company outing new TVs at CES. Panasonic took the wraps off the stunning EZ1002, its second-generation OLED set. This 65-inch flatscreen claims to output more than double the peak brightness of a standard OLED TV, plus it's got HDR support for HDR10 and the new Hybrid Log Gamma HDR standard set to launch later this year. Add what's claimed to be the most powerful video processing ever seen in a consumer TV, and you've got quite a TV on your hands. Look out for a hands-on review later in the week.

With superior picture quality to streaming, Ultra HD Blu-ray is emerging as a force to be reckoned with. Panasonic has taken note and launched three new 4K Blu-ray players at CES: the DMP-UB400, DMP-UB310 and DMP-UB300. As well as handling 4K discs, all three are compatible with 8K video, meaning they're future-proofed. They all upscale to 4K, too. Look out for them hitting the UK soon.

Amazon's Alexa voice assistant is already present in its Echo speakers, and Lenovo's Harman Kardon-powered speaker, and now she's found her way into TVs. Fire up a compatible 4K telly from US firms Westinghouse, Element or Seiki, and you can ask Alexa questions and have her fetch you information while you watch. There's no word on whether these sets will come to the UK - maybe we should ask Alexa.

You don't need to ditch your current headphones if you buy an iPhone 7. If you have a pair of Shure headphones that use the MMXC connector, this Lightning adaptor will mean they play nice with your new iPhone. Plus a DAC and amp are built into the in-line remote. It's due in the spring.

We've seen modular mobiles before, but modular headphones? The Fuse earbuds knit together using a connector to make a pill-shaped module which is then compatible with various storage options. Clever.

LG's first Dolby Atmos-compatible soundbar supports hi-res audio, has a slimline design and two upwards-firing speakers. Chromecast support means you can stream to it, and it works with 4K Blu-ray players. Atmos with one speaker? It seems it can be done...