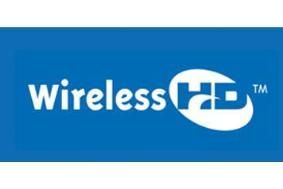 It's not hard to see why. One of the factors holding many people back from buying a home cinema system is the need for spaghetti-like cabling around the room.

Now there's another challenge. Many of the new flatscreen TVs we've seen here are incredibly thin, and are thus more likely to be wall-mounted. And to keep them so thin, they often come with a separate receiver box/tuner that needs to be connected to the screen.

Clearly, you're not going to want an ugly great cable hanging out of the back of your flat TV when you've mounted it in pride of place in your lounge.

Wireless HD Consortium founded
So a whole bunch of manufacturers have come together to support the Wireless HD Consortium. It was founded in 2006 with just six companies, and today has 30 members, including LG, Panasonic, Samsung, Sony, Toshiba, Sharp, Hitachi, Onkyo and Pioneer.

The consortium's objective is simple. It believes that consumers want a relatively low-cost solution for wireless transmission of Full HD, uncompressed video and HD sound between their source components, TVs and surround sound systems.

John Marshall, chairman of the Wireless HD Consortium, explains: "Since October 2008 we've carried out a survey of 2000 consumers around the world and the feedback has been clear: they want wireless HD transmission in the home, but without any loss of picture or sound quality.

"So any form of lossy or compressed transmission won't do. They also want to be able to connect portable devices such as digital cameras and HD camcorders to their home entertainment systems wirelessly too."

Draft 1.0 spec for wireless 1080p at 60Ghz
The result is that the Wireless HD group has developed the 1.0 draft spec for lossless, uncompressed 1080p video transmission in the home at 60Ghz (the first time 60Ghz has been used on consumer products).

Compliance testing on the test spec was completed this month, and Compliance Certification Services Inc in the US has been appointed as the world's first Wireless HD test centre.

"All wireless HD products must work together - interoperability is the key," says Marshall. "We are also committed to ensuring that all Wireless HD certified products will be backwards compatible with future ones."

Essentially, there are three types of Wireless HD product now in development and much in evidence in prototype form here at CES:

1) Flat panel TVs with a separate media box that connects wirelessly to the screen and can transmit full 1080p video and broadcasts from box to screen.

2) Wireless HD transmit and receive adapters that can for example send a Full HD signal from your Blu-ray player or set-top box directly to the TV.

All of these products will have to have the official 'Wi HD' logo certification before the come to market.

One of the smartest things about the system, as we saw demonstrated yesterday on the Panasonic stand, is that the technology allows the wireless beam between screen and source component to 'steer' around obstructions in the room, such as people walking about, without the signal breaking up.

The Wi HD standard allows for a maximum range of 10 metres between components, and full HDMI functionality can be included (ie the wireless link gives exactly the same functionality as you currently get with a wired HDMI connection).