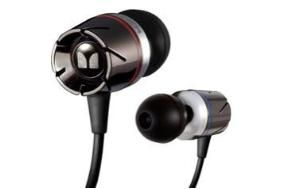 At its press conference this morning, Monster continued the musical theme by unveiling a new set of in-ear headphones under its Beats by Dr Dre brand, called the Turbine.

"There's nothing like this, they sound like a big speaker with built-in subwoofer," says the head of Monster Noel Lee. The Turbine in-ear 'phones will sell for $150 in the US.

Lee was in ebullient mood as he unveiled a string of new products at CES, including:

* A wireless HDMI transmission system for high-definition TV, due for launch this April. Its Wireless Digital Express HD system consists of a transmitter (the DX WHD TX1) and the DX WHD RX1 receiver.

* The Digital Life range of USB and Ethernet computer cables.

* Monster Green Power mains blocks which automatically power down all your components when you switch off your PC or home cinema system.

* A deal with Hewlett Packard to launch a range of dual-branded Monster/HP computer cables.

* The planned launch in April/May of a Monster mains filter system with built-in internet TV capability, the iTV Power Center, in partnership with Digeo.

* A new high-speed HDMI cable, the Hyperspeed M2000, which is capable of transmission speeds of up to 21Gbps over distances up to 30ft.