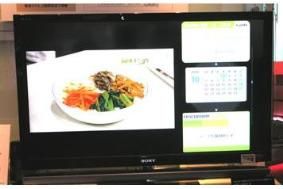 We've already covered Panasonic's concept of the Life Wall, filling one entire side of the room and providing everything from entertainment to communicatios, and it's already showing signs of heppening in the form of a 103in plasma Life Window installed in the living room of the company's concept Eco & UD house at its Tokyo showcase.

But Panasonic's not the only company thinking this way: here at the show Sony was demonstrating a TV able to switch from live to TV to associated web content, stream in additional information and even operate as a communications portal. It's all controlled by a simple handset with menus and quick access buttons, making the set simple and intuitive in use.

Toshiba, meanwhile, is going big on multiple content as part of its Digital Life Innovation concept. On its large stand, which is showing among other ideas Kanren Navi, an HD wireless distribution system, it has TVs able to show up to 48 images at once.

It's done with the company's Cell Broadband Engine processor technology, co-developed for use in Sony's PlayStation3 games console, and multi-decoding. The demonstration includes a TV with no fewer than eight tuners running simultaneously, and able to decode signal from a variety of formats and sample rates in parallel.

This goes beyond the Resolution+ upscaling/upconversion technology the company has already announced for its latest TVs, and makes possible what Toshiba is referring to as Happy Zapping.

This allows a wide range of content, both stored and live, to be browsed on the screen at the same time, and selections made for viewing. If you live with someone who's constantluy channel hopping, be afraid - be very afraid...

Also shown as a concept is what the company is calling its Wall TV; needing no stand and no mounting, this Toshiba Regza set can simply be leant against a wall for viewing.