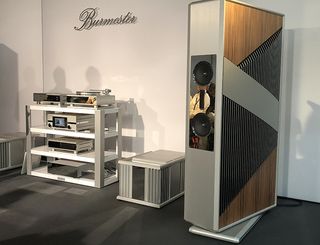 Launched at the Munich High End Show 2018, the BC350 speakers, 159 mono power amplifier and 175 turntable are the first entrants into Burmester’s new Signature series.

The most significant of these launches is the 159. It takes prime spot as Burmester's new flagship mono power amplifier, sitting above the iconic Burmester 909 (the company’s flagship amp since 1990).

The new 159 has been seven years in the making, and this 909 descendant shows off the pinnacle of Burmester’s analogue electronics technology. Each monobloc weighs 350kg, contains 4000 individual components and delivers a whopping 1200W of power per channel.

Standing over six feet tall and weighing 350kg each, the BC350 speakers were shown as prototypes at last year's High End Show 2017, but they’ve been redeveloped since last year’s preview and are ready for production.

This configuration means that BC350s can offer two sound modes. The Pure mode is designed for “classic audiophile enjoyment”, focusing on delivering the highest resolution, precision and “authenticity”, while the Live mode offers greater space, dynamics and “playfulness”.

And rounding up the Signature trio is the 175 turntable - which was unveiled as part of the brand's 40th anniversary last year. Made of cast aluminium with a brass core, featuring four AC drive motors, a nine-inch aluminium and carbon fibre tonearm, integrated phono stage with technology derived from the Burmester 100 Phono, a separate power supply, and magnetically decoupled feet, the very shiny turntable weighs a hefty 60kg.