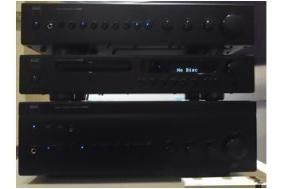 You can catch the NAD T587 Blu-ray player (£850) in action here at the show, and get a glimpse of the company's first fully-specced HD audio multichannel AV receiver, the £800 T747.

The most striking thing about the T747 is that it has a redesigned fascia – gone is NAD's traditional, boxy look and in its place is a smoother, more minimalist design.

Behind the new clothes lie seven channels of 100 watts, decoding of all the new high-definition audio formats, four HDMI inputs and one output, auto calibration, a new remote control and iPod connectivity.

There's also an input for an optional DAB module and an RS232 port. Expect the T747 to arrive in UK dealers this April.

Also due in April is the NAD T737, a stripped-down version of the T747 without onboard HD audio decoding. It will sell for £500.

Upgrade modules for older kit
To help owners of older models who may want to upgrade, NAD is launching a series of four add-on modules that can be fitted to any existing NAD AV receiver under its MDC (Modular Design Construction) strategy.

The MDC AM 100 module, for example, adds Dolby and DTS HD audio decoding, while the MDC VM 100 module adds an HDMI repeater and supports all picture reosolutions up to 1080p. The dealer-fit modules will be available in a month's time, priced from £250-£500.

And last but not least is the NAD C717 DVD/receiver micro system with built-in DVD player, AM/FM tuner and Dolby Digital 2.0 decoding.