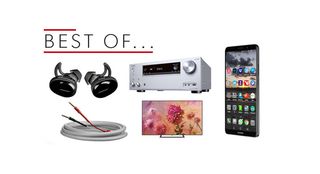 This week also saw the April issue go on sale in newsagents and online. This month we cover the latest multi-room systems, the best hi-res streaming services plus all the latest happenings in hi-fi and home cinema.

Don't forget, you can subscribe to the magazine, or buy the iOS, Android or Kindle editions.

Samsung has confirmed its line up of TVs for 2018, and it's a hefty list in terms of number and sizes.

The most interesting piece of news? Samsung intends to launch a massive 85in 8K in the second half of 2018.

Apple has apparently informed the music industry it will no longer to be accepting new iTunes LP albums after March 2018.

While the end is not nigh for downloaded music on iTunes, it would imply Apple is focusing most of its attention on its music streaming service, Apple Music.

The TX-NR686 can count among its features support for 4K, HDR, HLG, Dolby Atmos, DTS:X. DTS Play-Fi and well as Chromecast, AirPlay and Bluetooth functionality.

It'll be available from April onwards for £650.

Amazon Echo Dot vs Google Home Mini: which is better?

Where can you buy hi-res music? Here are the top download sites

It's a cable that enables a full-bodied, warm and expressive sound with a decent amount of detail.

Some rivals allow more space and insight, but the C-Screen's focus on musicality puts it in pole position.

Huawei may not have the brand recognition of an Apple or Samsung, but with each phone it's aiming to be among them.

However, the screen's colours can seem on the dull side and sound lacks excitement. All-in-all, a satisfying phone that's less expensive but not as good as its closest rivals.

The Frees are sweat- and water-resistant, built with the sports-person in mind. The sound they produce is weighty and full-bodied with lashings of deep bass.

They contrive to get a four-star rating thanks to the unreliable wireless connection between the earbuds, which isn't ideal for a pair of wireless headphones.