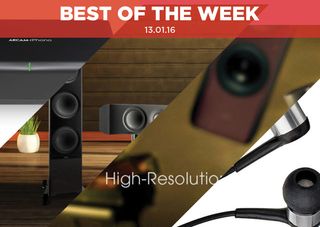 The February 2017 issue is now on sale and in it you'll find reviews on home cinema amplifiers, 40in 4K TVs and a number of wired and wireless in-earphones. You can subscribe here or buy the digital edition on Apple and Android devices.

The iniative is backed by the Digital Entertainment Group (DEG), whose members include Amazon and Google Play, and aims to produce better quality music streams.

Absent from the announcement were two of the larger music streaming providers, Apple Music and Spotify, neither of which has yet declared its support for hi-res audio.

Elac has revealed its Adante range of loudspeakers.

The series consists of the AF 61 floorstander, AS 61 standmount and AC 61 centre. Each comes with a new midrange/tweeter and 6.5in woofer.

It's expected to go on sale in the US between April and June. There's no word yet on a UK release.

Arcam's rPhono preamp is designed to improve vinyl performance by either replacing your amp's built-in phono stage, or making your amp turntable compatible.

The company claims the rPhono uses the finest quality parts and is optimised for low noise and minimal distortion. It is expected to go on sale next month, priced £400.

MORE: Arcam rPhono preamp will make the most of your vinyl without costing the earth

There's a petition to bring back 3D TVs

BBC to reinvent iPlayer, making it more like Netflix

Cinder Speakers is an innovative new use for cinder blocks

Samsung 2017 TVs – everything you need to know

Samsung 2017 TVs – everything you need to know

The best What Hi-Fi? deals of the month - January

Beyerdyamic is back in the budget earphone market with the Byrons - and they mark a spectacular return.

Whether it's the excellent detail, balanced midrange and treble or just its comfy fit, the Byrons offer a fantastic performance.

In this price range, the Byrons are now the in-ears to beat.

It's the time of the year when you have to wrap up warm and the same seems to apply to wireless speakers.

Joining a flurry of efforts to embrace the woolly jacket, the Yoyo has a big, rich, satisfying sound and features that includes Bluetooth and NFC connections.

Though its 1kg weight makes it less than portable, the Yoyo is a considered and accomplished speaker.

Elipson's latest turntables arrive with lots of useful extras, but the sound is what we're really interested in.

It's an entertaining performance with a good level of detail and no hard edges, though it could be better organised. In that respect, other turntables offer better all-round performances.

Despite that, the presence of Bluetooth and a USB port make it a versatile option and well worth a look.