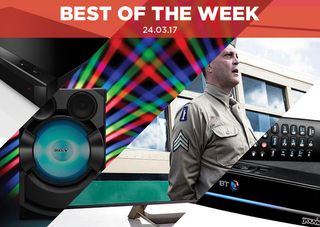 This week, Sony launched two new wireless audio systems, Apple revealed the replacement for its iPad Air 2 tablet and new music streaming service Voltra has come up with a novel way of charging for digital music.

Sony has launched two new audio systems and if you're a karaoke fan, they may be to your liking.

The MHC-V50D and Shake-X30D both come with NFC and LDAC-assisted Bluetooth for wireless playback. The former is more suited for portable use, while the latter can operate as a 2.1 system.

The iPad Air 2 has replaced by a new iPad that's simply called iPad.

It's an updated version of the 9.7in Air 2 rather than a ground up revision, and it features 4K video support, a new A9 chip and is slightly heavier than before.

A new music streaming service has come up with an interesting new business model.

Voltra promises to give signed-up artists 100 per cent of the money made through the service and it's able to do this by charging listeners a small for amount every time a song is played.

By the tenth stream, the track has been paid for in full and can be played whenever the listener wants. The service is currently in beta on both desktop and mobile platforms.

These are the best TVs to watch Netflix on, according to Netflix

The best What Hi-Fi? deals of the week

With superb picture quality and decent sound, Sony has pumped out another compelling 4K TV.

This 49-inch effort boasts vivid colours, sharp detail and black levels that make for impressive viewing. The sound won't replace a soundbar, but captures the nuances of a soundtrack well enough.

We can't think of a mark against it. If you're still looking for a reason to jump on the 4K train, this is as good as any.

Panasonic's first 4K player blew us away with its quality. Its second effort was good, but not quite great. Its third 4K player, the 'entry-level' UB400, is more affordable, but can it reach five-star status?

Not quite. It's another enjoyable performance but the picture isn't as subtle, punchy or as crisp as the UB900, which is now reduced in price.

That leaves us with a solid performer, but we reckon 4K needs a better player to bring out its quality.

We gave BT's first UHD box with a four-star review with the main issue its lack of 4K content. Can its latest box remedy that?

There's certainly more 4K content (especially if you're a sports fan), but Sky has arguably trumped BT with its slate of 4K titles.

The hardware and overall service is excellent and it boasts Dolby Atmos integration, which puts it a step ahead of its rivals.

BT is a good alternative if you find Sky too expensive and Virgin lacking in 4K content.