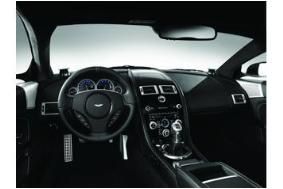 It's been designed exclusively for Aston Martin and cuts a striking design as you might expect from two brands so famed for producing design-led, performance machines in their chosen fields.

The system combines 13 individual speakers along with B&O's Digital Signal Processing system and ICEpower technology, and has naturally been designed with the DBS's interior in mind.

The loudspeaker grilles are finished with contoured aluminium so as not to harm the overall aesthetic of the Aston's interior, while there are two acoustic lens speakers that emerge on either side of the dashboard (see picture).

These ALT motorised tweeter units aim to deliver 180 degree dispersion of high frequencies, so nobody in the car is left out. As well as these two tweeters you'll find five midrange drivers, three more tweeters and three woofers, including an 8in sub beneath the rear bench.

As a neat touch of detail, all the cars will feature a name plate of the engineer who completes the final inspection of that particular vehicle. So if it doesn't sound quite right, at least we'll know who to blame...

Further information on the collaboration, the car and the speaker system can be found on the B&O minisite here or indeed the Aston Martin site here.