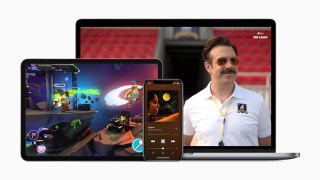 In addition to announcing two redesigned Apple iPads and Apple Watches (but no iPhone 12) today at its Time Flies event, Apple also introduced an all-in subscription bundle for its growing inventory of services.

Apple One packages the likes of Apple Music, iCloud storage, Apple TV+, Apple Arcade, Apple News+ and the just-announced Apple Fitness+ into a single subscription that starts from £14.95 ($14.95) per month.

The Premier plan – which offers the biggest monthly saving (£25, $25) of the three – will only be available in Australia, Canada, the UK and the US, where Apple News+ is available. Apple Fitness+ will join later this year when it launches.

Apple One will be available "this fall" with a 30-day free trial period.

For the uninitiated, Apple Music is the Cupertino giant's Spotify rival, while Apple TV+ video streaming service is its fairly new competitor to Netflix. Apple Arcade offers 100 games for playing on the iPhone, iPad, iPod touch, Mac, and Apple TV, and Fitness+ is a coming-soon fitness service for studio-style workouts that are delivered by "world-class" trainers and scored by motivational music. Lastly, Apple News+ is the company's digital newsstand for a plethora of newspapers and magazines.