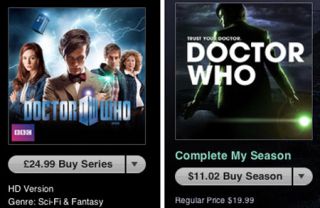 Apple's iTunes has long featured a "Complete My Album" option, letting users who've bought individual songs from an album to buy the remaining tracks at a knock-down price. TV fans haven't had the same flexibility – until now.

The company's added a "Complete My Season Pass" feature to iTunes – view an iTunes store page for a TV show (at the moment it only applies to recent seasons), and the Season Pass purchase price will be reduced to take account of your previous single-episode purchases.

Sadly, it doesn't seem to be working in the UK at the moment – our colleagues on Stuff.tv just tried to buy one episode of Doctor Who's most recent series and then complete the season, and iTunes isn't playing ball.

Hopefully UK users will get this feature soon – we could do with saving a few pennies in the post-Christmas period.