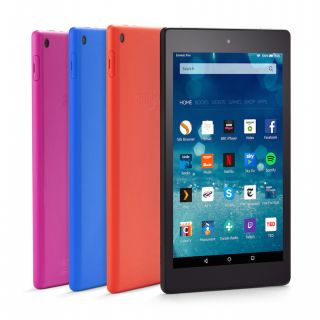 We're fans of the existing Fire HD 8, but a few improvements to the new model combined with a more affordable price tag could well push the new version of this budget tablet further up our list of favourites.

The Fire HD's 8in widescreen HD display remains the same and the tablet runs on Amazon's own Fire OS 5 operating system. Battery life is up to 12 hours, however, which is a big jump from the 8 hours of juice provided by the previous version.

There's also a 50 per cent boost in the RAM department (up to 1.5GB) that should deliver faster performance, while you can now choose between 16GB or 32GB of onboard storage (compared to 8GB and 16GB). If this isn't enough, you can always expand this by up to 200GB via microSD memory card.

Arguably the biggest draw of the new model is the price. The tablet starts at £90, which sits well below the £130 Amazon asked for the 8GB original. On paper, it seems an interesting proposition but as always, the proof will be in the testing.

The new Fire HD 8 tablet is available to pre-order on Amazon now.