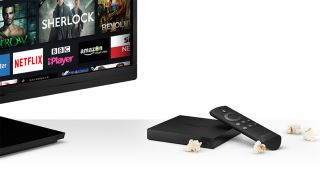 Yours for £79 from today [23rd October], the Amazon-branded device promises to offer a "huge, open ecosystem of entertainment" that includes music and video services such as BBC iPlayer, Netflix and Spotify.

Amazon Prime Instant Video (naturally) and Curzon Home Cinema are also among the number of services you can access through Fire TV, while Amazon hopes its other features will prove to be a hit as well.

According to the online retail giant, the Fire TV's quad-core processor will deliver three times the processing power of Apple TV and four times the memory of both its Cupertino-based competitor and Chromecast.

The Fire TV set-top box also offers up to 1080p HD video, support for Dolby Digital Plus and voice control, with the device sent out to you pre-registered to your Amazon account to reduce set-up time.

And there's what Amazon claims to be an exclusive feature in the shape of Advanced Streaming and Prediction (ASAP), which predicts movies and TV you'll want to view, automatically buffering them for playback.

If movies, music and TV programmes don't satisfy your entertainment needs, meanwhile, there's a full range of games on offer – created in partnership with game developers including Gameloft, Ubisoft and Sega.

EU Amazon Devices vice president Jorrit Van der Meulen said: "Our customers are very excited about Fire TV, and we’re delighted to be shipping in the UK. Fire TV offers powerful performance in a tiny box at a great price.

"It comes with an open ecosystem that provides access to a vast selection of content through BBC iPlayer, Netflix, Prime Instant Video and Amazon Instant Video, enabling customers to stream movies and TV shows in up to Full HD on demand."