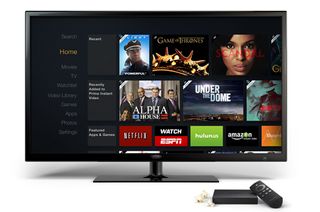 Amazon has announced the launch of the Fire TV set-top box, a new set-top box that promises to bring streaming music, movies and pictures to your TV.

The Amazon Fire TV box is available to buy now in the US costing $99, and sees Amazon taking on the likes of the Apple TV and Google Chromecast.

The Fire TV box offers access to Amazon's rebranded video streaming service, Prime Instant Video, plus Netflix, Hulu Plus, Vevo, Flixster and more in the US.

Amazon Instant Prime Video promises over 200,000 movies and TV episodes to rent or buy (the only nationwide service to do so in the US).

There's also access to streaming music services – in the US these include Pandora, TuneIn and iHeart Radio – and games, with Amazon promising "best-selling titles from EA, Disney, Ubiseft and others".

An Amazon Fire Game Controller is sold separately for $40, or you can use the Fire TV remote or the free Fire TV app for smartphones and tablets.

The tiny box measures just 0.7in thin, is capable of delivering 1080p HD video and Dolby Digital Plus surround sound, and claims 3x the processing power of the Apple TV box, Chromecast or Roku 3, thanks to a quad-core processor.

The ASAP (Advanced Streaming and Prediction) feature meanwhile claims to be able to predict what you plan to search for and watch, allowing the Fire TV box to buffer them before you even hit play – allowing instant playback when you do. Sounds clever.

Out now in the US, there's no word on a UK release date or pricing as yet.