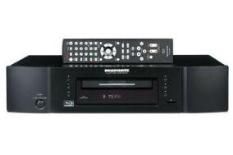 But first impressions of this player are mixed. The '7004 is Profile 2.0-enabled and Ethernet-equipped. It can bitstream or internally decode high-definition audio formats over HDMI or an eight-channel analogue output.

File support includes AVCHD and DivX HD, and there's an SD card slot on the front panel, too.

As an object, the curved fascia adds to the perceived value, but the loading drawer feels a bit flimsy. We're also disappointed by the player's slow loading times.

Up on Blu-ray is judged exceptionally well – it's vibrant, but not garish. There's great depth to the image, aided by pin-sharp edge definition.

The BD7004 also has real sonic presence. Whether it's the explosive, DTS-HD Master Audio soundtrack of Terminator Salvation or listening to a CD through the dedicated two-channel output, the '7004 displays a fine balance of detailed, sparking treble and weighty midrange and bass.

There was no guarantee the BD7400 would be able to continue Marantz's recent achievements, but it's done just that.