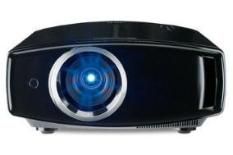 Projector Product of the Year, Awards 2010. The '550 turns in a frighteningly accomplished performance. To get it at this price, and with such an absence of fuss, is little short of extraordinary

Projector Product of the Year 2010

In the past JVC has had the Midas touch with projectors, walking off with the 2009 Product of the Year award.

But not for JVC a well-deserved rest atop its laurels: it's back this year with two new models. The '950 won another praise-littered review in January 2010, swiftly followed by the DLA-HD550 in our March 2010 issue

The D-ILA technology is JVC's proprietary take on an LCOS design, which does what a Sony sets out to do with its SXRD model.

JVC has an ingeniously easy set-up procedure. Motorised lens, shift and zoom controls allow you to get your picture in place within seconds, all using the remote control.

Two HDMI inputs, along with a smattering of other connections, lurk on the side.

A hugely subtle performer
Picture results are sublime. Feeding the rich, vivid hues of Smokin' Aces to the DLA-HD550, the signal is served up in a style unrivalled in this class.

The level of subtlety on display is what really sets it apart. Insight that bores deep into facial expressions and background details alike, and is as interested in bright colours as it is in dark hues, ensures that there's no shortage of texture and nuance to the image whatever you're watching.

Fast motion is often where projectors falter – but not this JVC. And no matter how gloomy the scene in The Dark Knight Blu-ray, this projector has no qualms delivering both depth and detail.

Jump back in to daylight and bright whites combine with a crisp, sharp picture construction to create brilliantly realistic images.

This is another triumph for JVC.

No matter at which price point its projectors arrive, the manufacturer's offerings continue to sweep all before them without so much as breaking stride.

Read all our projector Best Buys