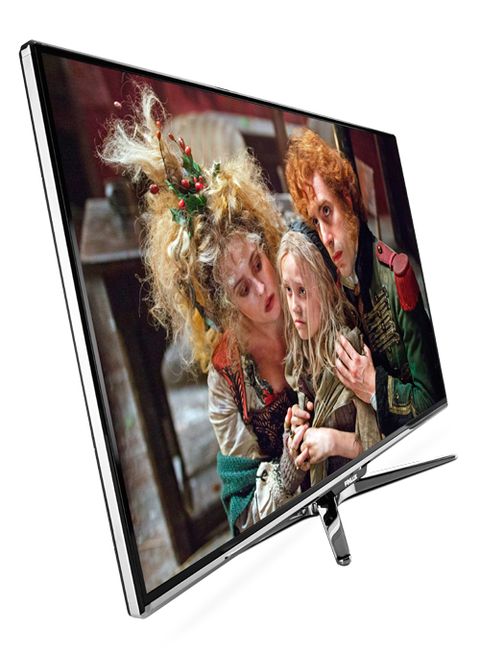 Thanks to a good picture, extra features, decent 3D and a low price, this Finlux is definitely worth a look

A 47in TV for £800? No, wait – let’s start again. A 47in Full HD LED screen with passive 3D and smart features for just £800? Either the TV business is really suffering, or there’s something terribly wrong with this set.

The truth is, neither. This Finlux 47S9100-T really is great value: offering the bells and whistles you’d expect of a 2013 TV, and delivering the essentials in picture quality, too. And it didn't come as a huge surprise, after the excellent performance of the £300 32in, the 32F8030-T.

Out of the box, the Finlux 47S9100-T is as slim and elegant as you’d expect of a modern TV. A slim bezel surrounds the budget 47in screen and it’s propped up on a shiny metal cross stand; it feels solid and looks attractive.

The 1920 x 1080 resoution screen works best natively with Blu-ray discs and 3D blockbusters, but it also has a decent DVD upscaler and a 2D-3D converter so you can add another dimension to standard TV broadcasts.

This Finlux has a good number of connections for the money: four HDMI inputs are the highlight of the rear panel, along with component, composite, RBG Scart and PC inputs, digital optical and headphone outputs, two USB ports, and an ethernet socket for a wired network connection.

Finlux also supplies a wi-fi dongle to connect to your home network wirelessly. And finally, a Freeview HD tuner takes care of the broadcast TV side of things (we’d be surprised to see a satellite tuner at this price).

When pulling up the source list on the 'S9100 TV, you’ll see that all the inputs get listed. To make things neater, you can disable the inputs you don’t use often so that they’re hidden from view; the limited list is more useful for easily switching between sources.

We like the flat rubber buttons on the standard (albeit rather long for some of our smaller-handed reviewers) remote. They feel grippy, are set out logically and are responsive and easy to use once you know what all the icons mean: there are shortcuts to broadcast TV, the smart content and the customisable source list.

Pressing the TV-with-open-book icon opens up the electronic programme guide. It’s a neat and simple interface, but looks rather dated, and there’s no picture-in-picture option to carry on watching while browsing other channels or smart content – that’s pretty much a given in most TV sets these days.

The smaller remote control seems like a good idea at first glance: the mini-remote lets you change the volume and channel, select the source, aspect ratio, programme info, and switch the power on and off.

Unfortunately, there’s no button for the programme guide, or for accessing any apps or the internet, so you have to use the bigger handset for the full experience. It also feels a little plasticky. As a rule, we like simplified remotes that perform basic tasks, but this one isn’t too helpful or attractive.

There’s a free control app for smartphone users, and at first glance it’s a funky design, requiring you to swipe up, down, left and right to access its screens and playback controls. It’s certainly a different feel from the orderly arrangement of rival control apps.

You can also use various gestures on the touch screen, as well as moving the phone physically in different directions to change channels and the volume (although remembering the combinations was tricky).

It’s responsive, sure, but the haphazard layout meant we spent more time searching for the correct screen rather than actually using it. It isn’t really practical enough for everyday use; we were more comfortable using the physical remote.

Open the Smart TV page and you’re greeted by a neatly arranged array of apps across the screen. It won’t win any awards for style or breadth of content, but the now-standard BBC iPlayer is invaluable for catch-up TV and radio.

What we do have an issue with is how slow the interface can be, with some apps doomed to a future of endless buffering. It can be frustrating to live with, and we’re hoping that future software updates will provide a smoother and more responsive experience.

On the whole, the addition of key apps is a great factor for the Finlux 47S9100-T, which aims to give an all-round entertainment experience, but the execution could be greatly improved upon.

We aren’t expecting leaps and bounds in the sonic department and, true to form, the Finlux does share the thin, sibilant, bass-light sound usually served up by flatscreen TVs.

It isn’t entirely uncomfortable on the ears, but if you want to fully enjoy watching your favourite TV shows on this 47in TV, we’d recommend investing in a decent soundbar such as the excellent LG NB3520A or the JBL Cinema SB200 – both £250.

So, to the nitty-gritty. It’s time to start watching some TV, and we kick things off with the Top Gear Polar Special in standard-def on Dave. The huge expanses of white polar ice would tax any TV set, but the Finlux takes it in stride.

Whites are bright and contain decent detail, but it’s all a little bit glaring and noisy at first, so we made for the Finlux’s menus – simple, orderly and easy to use – to tone-down the backlight and noise-reduction to ‘Low’ for a clearer, more natural picture.

The colour palette is well balanced, and sits on the right side of vibrant and dynamic, although we wouldn’t mind a shade more subtlety in colour gradients. There’s a hint of patchy backlighting at the corners of the screen, but it’s nothing too damaging or distracting.

We always recommend you keep a THX Optimizer disc to hand for fine-tuning any TV to its best, and with this Finlux, we found ourselves tweaking the settings just a little bit post-calibration.

Flicking between standard broadcast HD channels, we find ourselves enjoying the 47S9100-T – it’s a capable and unfussy TV, and offers a good deal of sharp detail. It’s the same story when we switch to disc-based content, be it DVD or Blu-ray. With DVD, there is an inevitable drop of quality in sharpness and black levels, which look slightly grayish compared with class rivals such as the Samsung PS51E550.

Play Looper on Blu-ray, and the combination of increasing the contrast and turning down the brightness just a touch made a big difference to the intensity of the black levels. You can also see how skilled the Finlux 47S9100-T is with displaying clear and sharp detail, and it gets the colour balance just right, too. It's exciting to watch.

There are hints of noise and motion blurring to edges during slow pans across the screen, where some objects will slightly stutter. But when it comes to fast motion the Finlux does hold its own; it might not be as super-smooth as rival (and much pricier) TVs such as the Philips 47PFL6008, but on the whole, the motion issues aren't too taxing and won't distract you from enjoying the film.

Compared with its rivals at this 46-47in screen size, such as the Samsung UE46F7000, the Finlux could have more insight – but then that TV does cost you a pretty penny more. And even without accounting for the 47S9100-T’s bargain price, this is still a really good screen that’s a pleasure to watch.

And just when you think Finlux has emptied its bag of tricks, it digs deeper and produces eight – that’s right, eight! – pairs of light, comfy passive 3D glasses.

The effect is gentle and easy on the eyes, with only slight motion instability in fast-moving scenes. The depth of field isn’t as dramatic as those we’ve seen on rival sets such as Panasonic and Philips, but we’re still impressed on the whole.

The 2D-to-3D conversion is more of a mixed bag. We avoid the ‘High’ setting due to motion issues, but Medium and Low offer a passable simulation if you fancy it. And, like the TV’s way with native 3D stuff, it’s a comfortable watch.

We’ve got to hand it to Finlux: it’s managed to combine all the trappings of a modern TV (Full HD, 3D, smart features, internet, a free control app…) into a really good package.

And let’s not forget that this is a big telly – 47in screens are rarely relegated to second bedrooms. Yes, it has its issues, but there aren’t many – so even if only for its price we’d have to recommend giving the 47S9100-T an audition.