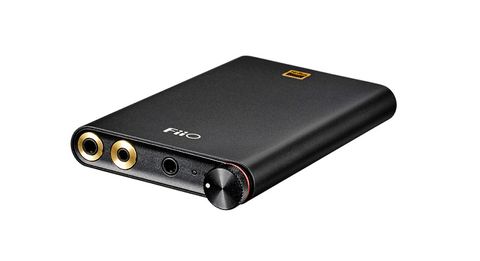 This portable DAC improves on your iPhone, but can’t beat some stiff competition

What’s the most common way people play music? The answer is, for better or worse, through their smartphones.

But the digital-to-analogue converter built into your smartphone isn’t going to offer you the best sound. In order to keep your device slim and costs down, compromises have been made.

So an external digital-to-analogue converter is the best way to get your smartphone sounding great.

There are a number of companies vying for that place in your pocket. Cyrus, Audioquest and ifi all offer great value-for-money devices – and now FiiO, a company with a long history of portable DACs, is back with its latest contender.

The Q1 Mark II is an iPhone-focused portable DAC (though it will work with Android as well) that’s priced to be your entry-level access to better sound.

It’s iPhone-focused because in the box is a MicroUSB-to-Lightning connection, which connects the Q1 Mark II to your smartphone. This is a nice touch, as it means you don’t need to use Apple’s convoluted Camera Connection Kit.

A USB Type-A to MicroUSB will still work, for use with a computer or an Android phone, but FiiO says because the USB output of Android phones is not standard (and could change due to different firmware versions) it can’t guarantee the DAC will work normally with all devices.

Approximately the size of a playing card deck, and weighing just 100g, the Q1 Mark II has improved on the Mark I’s design. Gone is the hip-flask motif, with volume dial in place of lid.

The dial has been moved to the right side, giving space on the left for the conventional 3.5mm and 2.5mm balanced headphone outputs and a line in/out port.

There are also a couple of switches too: one for adjusting gain (for better matching when it comes to headphone sensitivity), one for increasing the bass.

The Q1 Mark II feels great to hold, but the large volume knob means that you can’t use it while the FiiO is lying on a surface - the dial makes contact with the surface. A millimetre or two off the dial would have avoided this, and it’s disappointing that Fiio hasn’t made it so.

Inside the Q1 Mark II is a AK4452 DAC chip, which is capable of supporting files up to 32bit/384kHz and DSD256. iOS devices don’t natively support DSD (you’ll need to use third-party apps to play those files) but it’s good to know the functionality is there.

Rather than take power from your smartphone, FiiO has given this DAC a 1800mA battery, which it claims lasts an average of ten hours in use.

While other DACs will take power from the smartphone, this Fiio’s approach will ensure that you’re not compromising your phone’s battery – all you have to do is remember to charge it through its MicroUSB connection.

We charge it up and let it loose on both iPhones and MacBooks - and we discover the Q1 Mark II’s adequate, but somewhat superficial, character.

To its credit, it presents a relatively well-balanced frequency range – neither earthy booms nor tinkling highs come across with an excess of weight or undue sharpness.

Flick the ‘bass’ switch on the back though, and it’s a different story. 'Balanced and tight' becomes 'wide and boomy'. This weighs down the band’s low-fi pop sound and, although some people might enjoy the wilder low frequencies, it doesn't bring you any closer to audio fidelity.

We switch it off and play the rest of the track. The distorted guitars and the squeaking of their strings as the chords change come across with plenty of detail and texture.

Swapping to The Power of Love by Huey Lewis and The News, the Q1 Mark II demonstrates an acceptable amount of dynamism when it comes to conveying the striking power chords and the way Lewis’s potent vocals rapidly punch in.

The resolute 80s drumbeats have fair kick to them, never letting the side down when it comes to delivering a bit of low-end power and momentum.

However, compare it to the smaller Cyrus soundKey – our award-winner at £100 – and the Q1 Mark II is decidedly put in its place. The way Lewis delivers his lyrics as the track vaults through your headphones is much more obvious and clear from the soundKey.

Finishing with Mad World by Sacre feat. Mike Monroe, it’s clear the FiiO DAC doesn’t have the greatest understanding of space or organisation.

Once the chorus comes in, the soundKey gives you a vast, open space for the vocal (and the rest of the midrange) to fill. By comparison, the Q1 Mark II is foggier and smaller-scale.

FiiO’s DAC is a little like listening to an artist rehearse, while the soundKey reveals a defining performance.

A surer sense of timing, a greater sense of dynamism and a better defined and organised handling of instruments. These are the major areas the Q1 Mark II needs to address before it has a hope of dethroning our current Award-winner.

The FiiO Q1 Mark II is a piece of kit that spreads itself a little too thin. While there is definitely a place for its bigger body, tactile buttons and multiple ports versus sleeker, smaller products like the Cyrus soundKey, there’s no getting away from the fact the latter provides better audio performance.

If the FiiO sounded better, then we’d be more than happy with the extra bulk and could easily see the Q1 Mark II carving out a nice little niche for the discerning iPhone user. Right now, however, we can’t quite see its place.