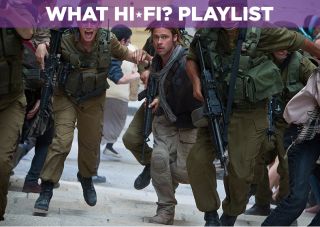 Zombie movies are like pizzas. Even when they’re not very good, they’re pretty good. That’s the case with World War Z. It ignores the intelligent recipe of the novel that inspired it, but there are some meaty ingredients.

The thing about zombie pictures is that there’s always some kind of hook. With Dawn Of The Dead it was zombies in a shopping centre. Dead Snow had Nazi zombies. In this instance, it’s a lot of zombies. The plague becomes a pandemic, and entire cities are overrun.

That’s been done before in the Resident Evil series – but WWZ doesn’t rely on provocatively dressed ladies slow-mo kicking monsters in the face. Instead you get Brad Pitt, whose luscious hair means he’s the man to find the origin of the outbreak.

It’s an excuse to fly around the world and look at the scale of destruction, which is impressive, especially when you first see the savage swarms of the undead.

They charge. They claw. They bash their heads through doors and crawl over each other like ants. There’s no slow shuffling here – sorry, Romero purists – but for once the zombies look and feel properly threatening.

This makes the set pieces really tense. There are too many of them to stop, so the only option is to run. The action is chaotic and relentless. People die horribly, even if there’s not much gore.

Sadly, director Marc Forster has not learned anything from Quantum of Solace, and holds to the school of thought that shakiness is a good shorthand for excitement. It’s a bit distracting.

What really works are the more subdued moments. Creeping through confined spaces is what survival horror was made for, and WWZ spends a good chunk of the third act doing just that. It’s a shame there’s not more, because it’s powerfully gripping.

Move away from Brad Pitt and zombies and it begins to unravel. The bureaucratic nightmare of apocalypse – who’s in charge? – is mentioned but quickly forgotten. There are too many characters, all entirely forgettable. Much time is spent faffing about with his family, but there’s little reason to care.

Still, this is an audiovisual treat. It wasn’t shot with lush colours in mind, but the number of locations means a nicely varied palette. Elsewhere, the sparse DTS-HD Master Audio 7.1 soundtrack is a good test of clarity and dynamism.

WWZ isn’t perfect, but there are good ideas and it’s not nearly as braindead as it could have been. If you want an engaging, visceral ride, it’s definitely worth a bite.