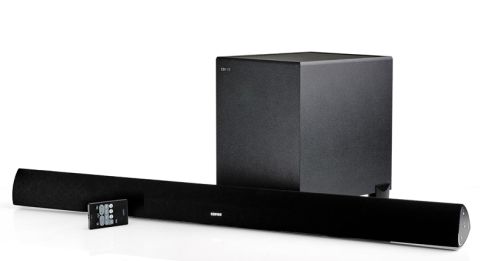 An improvement over a typical TV sound, but it needs to be more engaging

Unlike children in the days of old, soundbars should be heard and not seen. Although in an ideal world, where tellies could somehow stuff beefy drivers into anorexic frames, we probably wouldn’t need them at all.

Edifier is clearly in agreement because despite its CineSound B7 comprising a metre-long bar and sizable external subwoofer, its minimalist aesthetic couldn’t be any more discreet.

It’s certainly smart enough. Traditionally clothed and no chunkier than the giant Toblerones that you pick up at the airport duty-free shop, the sleek prism-shaped bar is simply garnished with just a small Edifier logo.

At one end, a panel features four buttons for changing power, input and volume – though that’s also where the flat, dinky remote comes in.

The B7 looks very similar to the company’s B3 model from last year, with the addition of a wireless subwoofer. Apart from another box to house, that adds a 20cm woofer to bring the sonic brunt alongside the bar’s four 7cm midrange drivers and pair of 20mm tweeters.

It should automatically pair with the bar when fired up, but if it doesn’t, sticking a pin into a connect button at the rear usually does the trick.

Physically, the bar tucks just inside the width of a 50in telly, and at only 8cm tall (and deep) is unlikely to encroach on the bottom of your TV screen.

Sticking it on the wall is an alternative – there are brackets on the bar – but either way, the subwoofer is best parked on the floor, as close as possible to the TV for best integration.

New to soundbars and hoping it’s a simple case of running a cable between your TV and the Edifier? Then you’re in luck. You can connect via the bar’s aux, RCA, optical and coaxial inputs.

HDMI inputs are missing, but that’s more or less the trend for budget – and even midrange – soundbars now.

It is worth taking the time to dial down the bass levels, a process that can be done manually on the sub itself. Turned up to full whack, the rumbling bass drones to the point of distraction.

On the remote there are three sound modes to experiment with; movie, which favours bass; news, which significantly amplifies mids (voices); and music, which we find the most focused and balanced.

£250 isn’t an insignificant amount to spend on a soundbar, so the Edifier has a bigger job on its hands than simply raising the performance of a flatscreen TV. It begins well, offering up a broad soundfield that’s far wider than that of the JBL Boost TV, and pretty spacious too.

Volume levels will satisfy even the hard-of-hearing too; stick it in a decent-sized room and it will make itself known.

The bar and sub work in close harmony to deliver a presentation that’s well integrated across the frequencies. There’s as much bass as you can handle, which bodes well for the concert footage in the Rolling Stones’ documentary Shine A Light.

The CineSound B7 gives the onslaught of electrics and drums weight, substance and a general low-end presence that a TV speaker couldn’t dream of producing. It’s a little on the soft side, though. Explosions in Furious 7 don’t sound quite as taut or punchy as we’d like.

While we don’t have to prick our ears to hear Vin Diesel’s brusquely-delivered one-liners, voices are a little recessed, so better projection and midrange solidity makes it onto our wish list, as does more detail across the board.

With dynamics struggling to rise to the occasion, revving cars aren’t energetic or exciting-sounding enough to send a shiver down the spine of most petrol heads.

Not only is the JBL Boost TV clearer and more dynamically expressive, we think forking out an extra £80 for the Q Acoustics Media 4 (£330) is a small price to pay for its greater level of transparency and solidity.

The bottom line: you can do better.

Buy the Edifier CineSound B7 here

See all our Edifier reviews