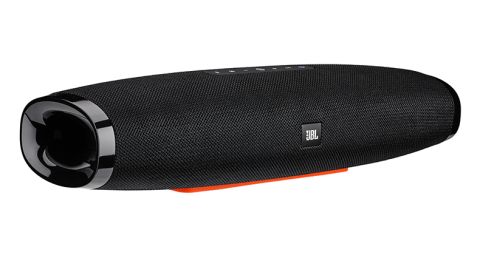 Nowadays there’s as much excuse for having dire TV sound as there is for not having wi-fi or internet access. If you haven’t the room for a surround sound package, you simply look to a soundbar (or soundbase) solution.

But what if you can’t accommodate a bulky box or external subwoofer? Before now, our sympathetic selves would be shrugging our shoulders and saying ‘tough luck’.

But then in comes the uber-compact JBL Boost TV: just 38cm wide, fitting very comfortably inside the waistband of a 32in telly.

Essentially, it’s a soundbar-cum-wireless speaker (if anything it looks more like the latter), with optical and 3.5mm inputs (cables for both are included) and Bluetooth connectivity. That’s not your lot, though; while JBL has downsized and scaled back on price here, it hasn’t reigned in on features.

There’s SoundShift technology, which automatically takes over music playback from a Bluetooth-paired device when it detects it, so you can get your quick fix of ABBA during the ad breaks without the faff of switching inputs.

JBL Connect lets it pair with another Boost TV or any of JBL's Flip 3, Pulse 2 and Xtreme wireless speakers.

In keeping with JBL’s design language, it’s essentially an elongated, capsule-shaped version of the Flip 3, solidly built and wrapped smartly in the tightly-woven material that takes willpower to not run your finger nails over. Unlike other JBL products, this one just comes in black.

While the dual bass ports bookending the chassis are handy for picking it up, their primary purpose is to lend a helping hand to the bass drivers.

There’s not much to admire about the flat card-like remote, though; while it’s functional, we’d make the JBL respond to your TV’s controller instead.

It might be obvious from its diminutive size, but the Boost TV will hardly knock your socks off beneath a whopping great big telly or in a sizable room. When it comes to spread of sound and bass levels, it’d be the runt in most soundbar circles.

But the JBL does its level best to push sound beyond its puny dimensions, and it shows; its soundfield readily exceeds the physical parameters of the 42in screen we pair it with. Just be aware that in sonically dense scenes – rowdy crowds or fight scenes, say – the JBL’s soundfield can feel a bit congested.

Its low-end is hardly timid: there’s clunk behind iron doors, texture to chugging jeeps, and an assured presence and depth to the soundtrack’s drubbing drums.

Playing Dawn of the Planet of the Apes, rivals can catapult sound much farther, and manage to get behind the ape’s stomps and the thud of collapsing buildings more convincingly too.

The JBL compensates elsewhere though: tonal balance, for one (goodbye tinny flatscreen sound), dynamics another. It has the range and elasticity to communicate the peaks and troughs of the fiery, pounding instrumentals, and the drive and agility to keep them charging vividly alongside the on-screen action.

Mids are crisp and clear, with gunshots and chimps’ cries dense yet piercing, although at higher volumes the Boost TV can feel the pressure, hardening up a little.

Voices don’t need any encouragement, all confidently projected with clarity and insight. There’s conviction in Caesar’s voice, reassurance in our protagonist’s, and echo to Gary Oldman’s delivery as he speaks through the PA.

While the JBL Boost TV’s expanse of sound and low-end power are second best to a lot of larger budget soundbar rivals, it offers a considerable improvement over many when it comes to dynamics, detail and clarity too – and for that, £170 seems reasonable.

If you’re tight on space or just want to keep the cost down, this space-saving soundbar isn’t a bad shout at all.