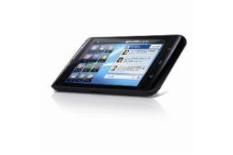 Falls between two stools, and not that gracefully: not a class leader

The 02-exclusive, Android-enabled Dell is an unusual device.

With its 5in screen, it's bigger than most phones, yet notably smaller than tablets such as Apple's iPad. So, does Dell have a true unique selling proposition or merely an oddity?

As a phone, it's hard to avoid the latter conclusion. Holding the Dell vertically to make a call works well enough, but it feels – and looks – odd.

Rotate the Streak horizontally, though, and it comes into its own. Viewing Star Wars: The Phantom Menace is, Jar Jar Binks aside, an enjoyable and entertaining experience, although it's neither as or punchy as its leading competitors.

It's a shame you can't load DiVx files either, although at least the fitted 512MB memory can be boosted by Micro SD up to 32GB. You can also buy a £55 dock (with HDMI out) to hook up to your TV.

Musically, the Dell is more challenged. The supplied earbuds are very poor: upgrade them and you can inject some pace and punch, but the basic sound is too muddled to be enjoyable.