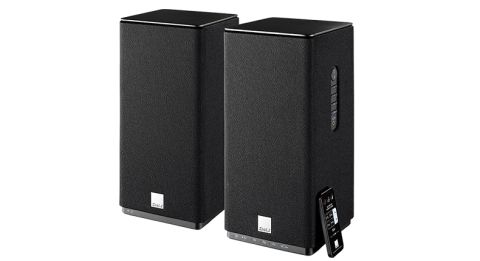 Still a talented speaker, but there are competitors that better it now

For a company that has built up its reputation in stereo speakers and speaker packages, the announcement of Dali’s Kubik Free active wireless speaker has signalled a move into new territory for the brand.

Like many premium wireless speakers, particularly those from traditional hi-fi manufacturers, Dali hasn’t concerned itself with the more affordable end of the market.

Even after two years, the Kubik Free still holds its price at £650 – a true reflection of the quality that this compact speaker is capable of.

Look closely and you’ll see where every penny has been spent. Behind the removable cloth panel, available in a choice of nine colours, you’ll find a 13cm mid-bass wood fibre cone, supported by a 25mm soft dome tweeter.

Both are Dali designed, as is the 100W digital amplifier which powers the unit.

On board is aptX Bluetooth, though there are wired connections for those who need them too, all hidden neatly under a clip in panel on the base.

These include an optical digital input for using the speaker with a TV and a micro USB socket for connecting to a computer. Both of these digital inputs support up to 24 bit/96kHz sampling rates.

You’ll also find a pair of analogue ins for hooking up CD players and the like, plus a subwoofer out for adding some extra kick to the low end.

It’s a great range of inputs, though we would say the sockets are a little close for comfort if you have all the cables connected at once.

You’ll also need to make sure you have any cables you require, as the Kubik Free doesn’t come with any included, which feels a touch mean spirited at this price.

What is included is a small remote, which allows you to control power, source and volume – you’ll be able to see what source is selected by following the white LED along the bottom of the unit.

The remote has been updated since we last saw the Kubik Free, and is now a much nicer feeling metal design. We still have similar issues with responsiveness though, which appears to be down to a short transmission range.

From our listening position we have to lean forward to ensure our volume commands are recognised. Even then, the buttons don’t always feel like they’re contacting with the electronics.

The good news is the same controls can also be found in a panel on the right side of the Kubik Free, but there is no control app to allow you to ditch the remote all together. We hope Dali has one in the pipeline.

Finally, nestled up alongside the controls on the unit is a 3.5mm auxiliary input for connecting a smartphone or tablet, with a handful of other controls on the back of the unit, including a full-size USB port for charging devices only.

This test focuses on the single setup, and we find Bluetooth pairing is quick and easy to the Kubik Free, taking a matter of seconds to connect before we start streaming music.

The results are good – take something like The Masterplan by Oasis, and the stripped back intro sounds delicate and intimate, with an impressive amount of detail, if not quite up to the levels of the AeroSphère Large.

Vocals are clear and sit pretty alongside precise, crisp guitar strums, while still providing enough get up and go for when the strings really kick in later.

It’s capable of a big sound for something so compact, but does sit on the leaner side with its presentation. This certainly helps with keeping it light on its feet for more complex rhythms, but means it isn’t able to compete with the weight and authority of the Mu-so Qb.

This leanness also emphasises the Dali Kubik Free’s slightly unrefined treble, which can make the likes of cymbals and electronic sounds sound harsh, plus can give a hardness to the edges of vocals too.

An app with some EQ settings might be able to help even this out somewhat, as while it isn’t overly distracting for short periods, we wonder if longer listening sessions could find this character a little tiring.

We take things up a notch and Rudimental’s Waiting All Night shows, which once again shows just how well the Dali handles timing and rhythm. It sounds tight, fluid and foot-tappingly entertaining and the bass is solid and balanced, but there is just an overall lack of warmth and solidity when compared with the competition.

It’s as though it’s been stripped back to help boost clarity, but ends up sounding a little clinical instead.

The AeroSphère Large shows it a thing or two when it comes to dynamics too, but for its size, it does more in this department than the Mu-so Qb, thanks to a touch more subtlety and insight in its presentation.

Feed it a Spotify stream of the Foo Fighters’ Everlong, for example, and the Kubik Free is able to offer up some separation of the cymbal beat from the guitar melody and vocals, while changes in tempo and volume are demonstrated with reasonable articulation.

It’s not the best on show here, but it’s a decent performance from such a compact speaker.

While the Kubik Free is happy to ride solo, it does have a partner in crime in the shape of the Kubik Xtra – a second speaker that turns the system into a stereo pair.

Simply connect them using the supplied umbilical cable and you’ll get an immediately more expansive, weighty sound, and a much greater sense of scale and drive.

If this sounds like something you’d want, you can choose to buy them in a package for £900, or add it in later for £295 instead.

It’s been two years since we first heaped praise on the Dali Kubik Free, and while much of it still stands – which is to its credit given the movement of the market in that time – there are now competitors that really challenge it, particularly if you have the space to accommodate a larger speaker.

We want a touch more bass richness and authority to tone down that leanness, a more refined treble and a bit more by way of detail and dynamics.

A remote app (or a better remote) and wireless support for streaming from NAS devices would be nice at this price too.

But there’s no doubt the Dali Kubik Free is still a wonderfully engaging speaker, with Dali using its wealth of speaker expertise to pack plenty into its compact size.

But we just need a bit more from it in 2016 for it to keep up with the competition, and so we have to dock it a star to make it a four.