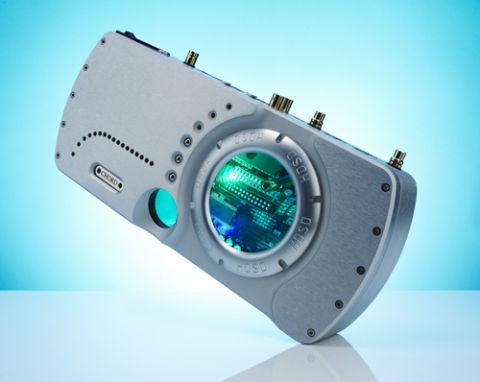 Chord’s QBD76 HDSD is a top-class converter that delivers a brilliant sound from a well-built package. It has plenty of visual appeal, too

We reviewed the original Chord QBD76 digital-to-analogue converter back in the tail end of 2008. It was terrific. The QBD76’s combination of dynamic thrust, class-leading resolution and fluidity made most rivals seem mechanical and uninspiring in comparison.

It has remained our favourite high-end DAC ever since, too, despite the arrival of even more expensive competition. That’s impressive considering the rate of progress in this area. Now we have the QBD76 HDSD.

Chord hasn’t been twiddling its collective fingers over the last few years, though. The QBD76 has been subtly revised over that time, and the latest version has a HDSD suffix to indicate the changes.

We’re a little disappointed by the first difference between old and new. We applauded the original QBD76 for Chord’s far-sighted inclusion of a Bluetooth input. We would have hoped this updated HDSD version would have taken that further and added aptX compatibility, which makes Bluetooth sound even better. Not so: Chord has decided to get rid of the feature altogether, which is a shame.

The upside is that the Bluetooth ability has been sacrificed for an asynchronous 24-bit/192kHz-capable USB connection that also accepts DSD (direct stream digital – the kind of data stream used in SACD). Back in 2008 the ability to play the highest resolution files through the USB input wasn’t considered vital. Now, of course, it is.

Chord has fitted a non-standard four-pin socket for this USB connection, which means the company has also had to provide a dedicated USB adapter cable. It’s an odd arrangement.

It also provides dedicated USB driver software for Mac and PC to allow the streaming of full-fat 192kHz files. It’s a simple process to install the software, taking just a few minutes to get up and running.

The QBD76 HDSD also retains the basic USB connection of the original. This can be used for files up to 48kHz, but Chord sees this input being used predominantly for playing uncompressed CD (16-bit/44.1kHz) rips. A DAC with two USB inputs is unusual, but could be very useful for some.

Alongside the USBs there’s the usual array of optical, co-axial and AES/EBU inputs. The co-axial connection uses BNC sockets. These make a nice, secure and electrically matched connection, potentially giving a better performance than the more commonly used RCA alternative.

If your digital transport has twin outputs for optical and AES/EBU – rare, admittedly – these can be used to deliver a 192kHz music stream. If not, as is probably the case, the upper resolution limit for both input types (used individually) is 24-bit/96kHz.

On a practical level we’ve found the optical input a mite fussy about the design of plug it will accept. This is down to the machining of the casework around the socket and means that cables with bulky plug designs don’t always sit properly.

Unlike many rival designs, Chord’s top-end converters have long eschewed mass-produced, off-the-shelf DAC chips; the company feels these restrict performance. Instead, its engineers have used large-scale programmable logic gate arrays – 1.25 million in this case – to run proprietary software that does everything from the switching of S/PDIF inputs to the actual digital conversion and filtering.

Take a look at the QBD76 HDSD’s top panel and there are three control buttons on the left of the large, colourfully lit porthole. One of them toggles through the inputs – the smaller circular window shows an internal display that indicates the input selected – while the others set signal polarity and buffer level. The idea behind the buffer is that the input music stream is stored there and clocked out accurately, so reducing the levels of jitter.

There are three buffer settings: no delay, one of around two seconds and that longest, which ends up at around four seconds. The longest setting gives the best sonic results in our test system, delivering increased refinement and sonic solidity.

As would be expected at this price level the Chord’s build quality is terrific: its casework feels rock-solid and the quality of the machining is lovely. There are two standard finishes, black and silver, but Chord also offers premium options at extra cost (around £500) for those that want something even more distinctive.

The QBD76 HDSD’s busy styling might not be for everyone, but there’s no denying it grabs the attention, particularly in a darkened room where its internal, multicoloured LED illuminations make quite an impression. While some might buy this product for its visual appeal we’re drawn to its performance. The sound character of this product remains unchanged from the earlier version.

Regardless of source or file resolution, this DAC remains a superb performer. As you might expect, it reproduces a lot of fine detail; that would be expected at this price level, as would be its wide dynamic range and ability to remain utterly composed regardless the complexity of music.

Old favourites such as Massive Attack’s Heligoland and The Dark Knight original soundtrack are delivered with considerable skill. We haven’t heard a rival near this price that can better the way this Chord handles low-level dynamics, nor one that layers those dynamic shifts in such a convincing way.

Add all these things together and you get a gloriously intimate and involving sound whether you listen to Aerial from Kate Bush, a 24-bit/44.1kHz version of the Unthanks' Here’s the Tender Coming or a 24-bit/192kHz recording of a Beethoven piano concerto.

The DAC’s stereo imaging is pleasingly layered and nicely focussed. Pricier rivals such as dCS’s Debussy – yours for around £8000 – generate a wider, more expansive sound stage, but the Chord isn’t embarrassed by the comparison.

That’s not all. Those that love bass are in for a treat, as the QBD76 HDSD delivers low frequencies with real authority and drive, rendering the textures of the sounds with a class-leading delicacy.

The Chord is happy to hammer out the Chemical Brothers’ Setting Sun with real venom – all the power and punch is fully intact, yet ask it to render the subtler bass lines of Paul Chambers as on Kind of Blue and it responds with class leading definition and precision. The presentation is tied together with crisp timing and an appealingly organic way with rhythms – the sound just flows when the music demands.

We remain huge fans of this converter. In a fast-improving market it remains a top class performer. Regardless of digital source it deserves to be on the shortlist of anyone looking at buying a high-end DAC.