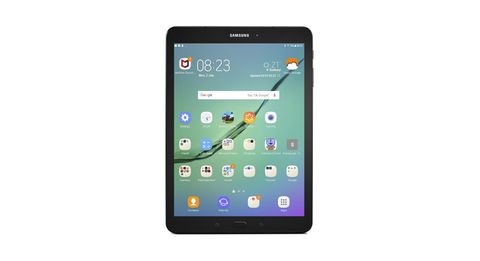 A capable Android tablet, but it still finds it tough to get to the top

The Android tablet market, which includes the Samsung Galaxy Tab S3, is stuck between a rock and a hard place – the rock being Amazon’s Fire tablets that offer a casual-use tablet at a budget price, and the hard place being Apple, which dominates the market with its iPads.

Nevertheless, the Galaxy Tab S3 is trying to find a niche somewhere in between. A £600 price tag gets you a 9.7in screen and a pressure-sensitive stylus, the S Pen, that works in a similar way to the Apple Pencil.

The S Pen is by far the most enjoyable part of the Galaxy Tab S3 experience.

The feature itself is easily reached – there’s a button on the S Pen that brings up a range of stylus shortcuts, including screen writing, screenshot selection and note creation. Doodling on the screen is smooth and fun too.

It’s especially welcome that the S Pen is included in the box – the Apple Pencil costs an extra £80 on top of the £620 iPad Pro. The S Pen is better than the Pencil, too. It is able to detect four different levels of pressure, so you can easily make more refined annotations.

Another nice addition is the fingerprint scanner (although the device’s glass back is a magnet for smudged fingerprints). It sits alongside the ‘app’ button and the back button – physical equivalents of the three-button layout common to Android smartphones running Android Nougat.

Powering the Galaxy Tab S3 is a Snapdragon 820 processor, with 4GB of RAM and 32GB of storage – although that can be bolstered with an extra 400GB with a MicroSD card.

For the most part, this makes for a smooth experience, but there are still times when the Galaxy Tab S3 feels like a budget tablet. Upon start-up you still have to wait for apps to pop into existence – a definite no-no for the iPad – and a couple of games we tried to run didn’t load up.

This isn’t particularly surprising. The Android operating system on tablets has never been the slickest experience, but you should really expect better from a premium Android device.

The Galaxy Tab S3 comes packed with bloatware – some of which you can uninstall. The duplicate gallery, calendar, and internet apps work fine, but none are better than the pre-installed G Suite assortment, nor the selection of pre-installed Microsoft apps.

The battery clocks in at 6000mAh, which equates to a claimed 12 hour of video playback. It supports fast charging too, so you should get a full battery in under three hours.

The main camera is a 13MP sensor with an f/1.9 aperture lens, while the front-facing selfie camera has a 5MP resolution. It’s fine for quick snaps – and superior to the one on the 9.7in iPad Pro – but we’d guess most people will already have a better camera on their smartphone.

When it comes to picture quality, there’s no denying the Galaxy Tab S3 is so sharp it might cut itself – it really makes the most of its 2048 x 1536 pixel resolution.

Watching Parks And Recreation through the Amazon Prime Video app, the fabric on Ron Swanson’s (Nick Offerman) shirt, the hair on his arms or the chips in the concrete wall behind him all come across crisply, with a surprising amount of nuance.

Motion doesn’t present too much of a challenge either - during a scene in a club, the Galaxy Tab S3 handles rapidly camera movements easily and keeps track of all the dancing characters like a particularly protective bouncer.

But what lets this tablet down is its handling of colour. It’s impressive, with bright blues, punchy greens and a more extreme sense of contrast than some rivals.

This presentation may seem attractive in the store, but it soon becomes apparent it errs on the overly bold side of natural.

The iPad Pro’s colour range is decidedly more accurate and its skin tones are better balanced – especially during dark scenes. There’s no denying that the Galaxy Tab S3’s AMOLED screen makes blacks really black, but that depth drowns out the little details still visible on the iPad.

Also, while the Galaxy Tab S3 is HDR compatible, this is only through the Amazon Prime Video app – and there’s no indication in the app whether a video is in HDR or not.

On the audio side, the Galaxy Tab S3 does offer some benefits over its Apple competitors – and one of them is the greater level of control you have over its sound.

Built into the settings is a ‘sound personalisation’ mode featuring a series of beeps at different pitches, which the tablet then adapts the audio settings specifically for your ears.

We found this feature useful, as it adds a bit more dynamism and detail to the tracks that isn’t available on its default setting.

The tablet also comes with Dolby Atmos support, and while you shouldn’t expect the sort of surround sound you get with a real Atmos system (or an expensive soundbar) it does make your music more dimensional.

Playing It's A Long Way To The Top (If You Wanna Rock 'n' Roll) by AC/DC, the S3 provides a good deal of gusto to the roaring guitar riffs and the thumping drums.

Combined with the five-star AKG K550 headphones, it manages to hit the ears with a solid punch that also conveys the texture of each note.

Bon Scott’s vocals come across loud and clear, cutting through the rest of the instruments to grab the listener by the scruff of the neck. Hitting the high notes, the signature bagpipes manage to fly through the air without coming across compressed or overly sharp.

Switching to Shelter by The xx, the Galaxy Tab S3 provides a good deal of detail to the breathy, intimate lyrics – helping you make out the distance and fragility of the track.

However, there are a few areas where Samsung could improve. The first is how this tablet handles dynamics. They’re decent enough, but Apple’s current generation of iPads manage to convey the change in intensity with greater subtlety, providing a more definite and decisive switch from the small-scale to the large.

The second area is rhythm – the Galaxy S3 has an adequate sense of timing, but it doesn’t quite manage to pull together each element of a track and put out a cohesive sound as well as the competition.

For all its faults, the Samsung Galaxy Tab S3 is probably the best Android tablet on the market at the moment.

It’s a nice middle-of-the-road mark for those that want to doodle but don’t want to pay premium costs for an iPad Pro and Apple’s Pencil, while also providing a clearer, crisper image than lesser Android tablets or Amazon’s Fire range.

However, Android 7.0 doesn’t translate as well to tablets as it does on smartphones, and there’s no denying that Samsung still has kinks to smooth out when it comes to getting a full five stars for its picture and sound quality. Those who just want a casual-use streaming device can find that for less with Apple’s 2018 iPad.

But if you’re already deep in Google’s ecosystem and have the money to spend, then this is the tablet to go for. If not, you might want to consider the other options available.