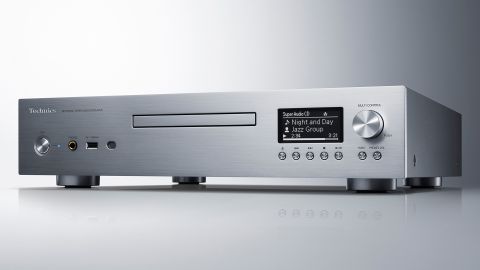 If you’re looking to buy a high-quality digital source that covers all bases, the Technics SL-G700 is a brilliant option

The Technics brand may be better known for its iconic turntables, but the arrival of the new SL-G700 shows that the company has more than just analogue strings to its bow.

The Technics SL-G700 doesn’t fit into any neat category. It straddles across generations of digital formats by playing discs – in CD and SACD form – as well as streaming music from across a network or via Bluetooth. AirPlay, Chromecast and even MQA are firmly on the menu.

At first glance, it looks just like a humble disc player. We like the understated visuals but love the build. This is a premium-priced product and certainly feels it.

The Technics SL-G700 is a hefty unit, weighing in at over 12kg. That substance is backed-up with rigid, nicely damped casework and a standard of finish few rivals can better. The controls work with well-oiled precision, though the bulk of the buttons seem unnecessarily crowded on the right side, with an oddly proportioned display for company. This arrangement leaves much of the front panel bare apart from the headphone, USB and power button on the other side of that wonderfully silky smooth CD drawer.

Around the back, you’ll find balanced and single-ended analogue outputs. You’ll also see a USB, a pair of aerials for wi-fi, optical and coaxial digital connections and an ethernet socket. Though wi-fi works well enough in our test room, we always recommend going down the wired network route, where possible, for greater stability and reliability in the long run.

Getting things up and running isn’t as slick as it could be. You’ll need to set-up the SL-G700 on your network using the Google Home app first. Once this is done you then need to switch to the dedicated Technics Audio Centre streaming app to control the streaming operations.

It’s a decent piece of software, albeit lacking the design flair of alternatives from Naim, Linn or even Bluesound, however, it doesn’t control all the operations. If you want to use the disc playing side of this machine, you have to use the traditional remote handset provided with the player. If you switch sources often, swapping between the app and the physical handset feels cumbersome.

It doesn’t help that the player isn’t the most responsive around, taking a few seconds to think about things rather than doing them instantly, particularly when it comes to switching between streaming duties. The SL-G700 simply doesn’t feel as polished as the best streamers around. The saving grace for the Technics is that it does a lot more than them.

We may not have warmed to the way this player operates, but we can certainly admire just how well it plays music. You won’t necessarily get this impression over Bluetooth, though. The sound is a little bland, but still decently clear and informative when using this connection.

The situation improves massively when we start playing discs. We play Prince’s Diamonds And Pearls and are a little surprised to find out just how good a player the SL-G700 is. It’s up there with the best CD players under £2000 ($2500), delivering a detailed and precise rendition that still has plenty in the way of punch and rhythmic ability. This is a player that can deliver Gett Off with all the drive and attitude it deserves, yet still has the skill to render Prince’s voice with the nuance and emotion intact.

Bass has plenty of weight and punch but remains agile and tuneful. The Technics sounds cohesive, every instrument and sound coming together seamlessly to create an entertaining and exciting presentation.

We play Stravinsky’s The Rite Of Spring on CD next and the SL-G700 sounds right at home, delivering a sound with plenty of scale and authority. Large dynamic sweeps are rendered with confidence and the stereo imaging is as precise and layered as we could hope for.

The player’s tonality is nicely judged between providing enough weight and warmth without sacrificing bite at the top end. This is a refined performer, but it never goes so far as to dilute the excitement from the music being played. That’s a hard balancing act that few get right.

The story gets even better when we dust off our SACD collection. We listen to an old favourite, Eric Bibb & Needed Time’s Good Stuff, and are impressed by the SL-G700’s ability to resolve subtle details and the delicacy with which it reproduces Bibb’s acoustic guitar. The sound is full-bodied, fluid and organic enough to make us wish that the SACD format had made more of a lasting impact than it did.

We have to admit, we weren’t sure that the streaming section would keep up the good work, but it turns out that it does. We stream music from our reference Naim NAS and aside from the player’s slightly clunky operation, we find little else to complain about. This is a fine streamer, certainly up there with the best at around £1000 ($1275).

We listen to a range of music from the likes of Bob Marley, Red Hot Chili Peppers and Beethoven, and the Technics always sounds at home. There’s plenty of excitement when the music demands, but it’s coupled to an ability to shift down a gear when necessary. Marley’s Three Little Birds comes through with its feel-good factor intact while Beethoven’s Fifth Symphony is rendered with all the power and drama it deserves.

The likes of Chromecast and AirPlay work well enough, but in the context of the SL-G700’s sonic abilities, their main purpose is to provide a choice of source material rather than push sonic boundaries.

But there are a few things we don’t like. The sound through the front panel headphone output is reasonable at best. We try the Beyerdynamic T1 and Grado’s RS1s and find that the sound lacks the clarity and dynamic expression of the line-level output. It’s not bad and remains perfectly usable, but you won’t hear the Technics at its best through this connection.

We’re pleasantly surprised by the Technics SL-G700. We half expected a compromised package that, while packing in plenty of features, would struggle to excel with both disc and stream. What we got was a superb sounding product that sets high sonic standards across the board. If you can live with the clunky operation, and on balance we can, this is a terrific buy.