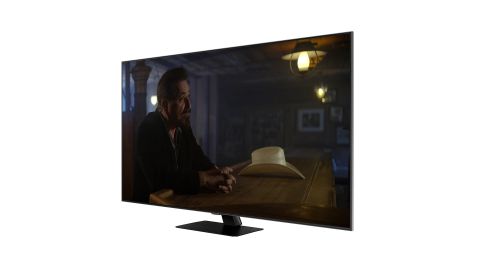 The Q80T offers a near-flagship performance at a price that’s closer to mid-range, and that makes it an excellent performance-per-pound proposition

Samsung has rather made a mess of the naming structure of its 2020 TVs, so the TV you're looking at may not be the replacement for the 2019 model you'd expect.

Take the Q80T, for example. Samsung insists that it’s not a replacement for last year’s Q80R, as you'd expect, but is instead the successor to the Q70R, even though the specs seem in some ways closer to those of the former than the latter.

Why would Samsung do that? The only reason we can think of is so that expectations are lowered. But that makes no sense at all, because the Q80T is a superb TV regardless of which model it replaces.

The QA55Q80T looks much like every other QLED of the last couple of years, all dark silver metal, straight edges and pointy corners. Unlike the higher-end Q95T model, which has a single-piece pedestal, the Q80T’s stand is a slightly less suave two-piece design. That said, it still has a compact footprint and the sort of low profile that makes for easy placement of a soundbar.

Another difference between the Q80T and Q95T is that this cheaper model lacks the flagship’s One Connect box, through which all of the Q95T’s connections (and power) are routed. In fact, Samsung has reduced the number of TVs in its range with One Connect to just two: the Q95T and the 8K Q950TS.

Samsung suggests that customers have been reticent to spend the extra money the One Connect adds to the price of a TV, and so it’s now restricted to the flagship 4K and 8K models. We’re big fans of the ingenuity and neatness of the system, so it's a shame to see its availability reduced but, on the other hand, Samsung’s 2020 TV prices are lower than 2019’s.

With all of the connections and processing kit that would otherwise be in a One Connect box now in the main chassis, the Q80T is a bit thicker than the Q95T, measuring 5.4cm rather than 3.5cm. It’s still slimmer than the Sony KD-55X9500H (7cm) that could emerge as its closest rival this year, though, and it’s not actually much thicker than the more expensive LG OLED55CX (4.7cm) either.

The Q80T has a fairly standard array of connections, although it’s worth bearing in mind that Samsung hasn’t included headphone sockets on its TVs for some time now – you’re expected to use Bluetooth instead.

The HDMIs, of which there are four, aren’t officially 2.1-certified, but they do support all of the key 2.1 features, including eARC (Enhanced Audio Return Channel), HFR (High Frame Rate), ALLM (Auto Low Latency Mode) and VRR (Variable Refresh Rate). On the subject of VRR, the FreeSync format used by the Xbox One X and One S is supported out of the box, while G-Sync is apparently coming soon.

Such is the abundance of apps that come packaged with the Tizen platform, you can get a huge amount out of a Samsung TV without ever connecting an external source. Subscription-based 4K HDR streaming is available via Netflix, Amazon Prime Video, Disney+ and Apple TV+; pay-as-you-go content (also largely 4K HDR) is also available via the Apple TV app, Rakuten and Google Play Movies & TV.

Australian buyers can also access the likes of Kayo, ABC iView, SBS On Demand, 7Plus, 9Now and 10Play and, if using your TV to listen to music is your thing, the Q80T packs in apps for Spotify, Tidal, Apple Music, Amazon Music and Deezer.

In short, Samsung has left pretty much no streaming stone unturned, but Tizen is designed in such a way that it's never overwhelming and so that the content you want is always at your fingertips. This is helped by the remote, which lacks the smart silver finish of the Q95T’s zapper, but has the same stripped-back selection of buttons.

The only real cause of frustration in the Q80T's feature set is Samsung’s continued stubbornness in resisting Dolby Vision in favour of its own advanced HDR format. Though the amount of HDR10+ content is slowly increasing, with much of Amazon Prime Video’s 4K catalogue featuring the format and the occasional new disc appearing (1917 is a recent example), Dolby Vision is still far more prevalent and growing much faster, particularly with Disney+ and Apple TV joining Netflix in streaming content in the format. It’s time to put pride aside and board the Dolby Vision train, Samsung.

After much experimentation, we find that the Q80T responds well to the same picture tweaks we made to the Q95T. Thankfully, the strength of the set’s out-of-the-box settings and the clarity of the options mean there’s not too much to it.

We use the Standard preset for all content except games (use the Game preset here). For HDR, we simply add a point to Shadow Detail, switch Local Dimming to High, switch Picture Clarity to Custom and turn the Noise Reduction off.

As ever, it is worth experimenting with the settings yourself to find the balance you prefer, particularly the Local Dimming and Picture Clarity options. By setting the former to High we increase the punch of bright highlights in otherwise dark scenes but lose a little bit of shadow detail, and while Custom is the right amount of motion processing for us, some may still prefer to switch it off entirely.

With our chosen settings, the Q80T does an excellent job with Blade Runner 2049 on 4K Blu-ray. We’re immediately struck by the depth of the set’s blacks and the consistency of its backlight. Many non-OLEDs in the mid-range segment suffer bloom when lighting a bright object on an otherwise black background, but you rarely notice the Q80T’s backlight in action, you simply see a bright image emerge from an otherwise almost entirely black screen.

The Q80T’s peak brightness is rated at 1500nits, which is just 500nits lower than that of the Q95T and still very bright indeed. It also has fewer dimming zones (Samsung won’t reveal the specifics, but we understand the Q80T has fewer than half the zones of the Q95T), so holds back a little more than its premium sibling in these high-contrast scenarios, but compared to price-appropriate rivals it provides a fabulously dynamic image.

As we get our first glimpse of K in the cockpit of his car, the charmingly rudimentary LED panels of the dashboard are much brighter and clearer than from rivals, punching out from the dark more effectively.

The excellent contrast combines with sharply drawn edges to create a very three-dimensional image. The distance between foreground and background appears greater than from rivals, with K standing out from the screen somewhat. And as focus shifts to his hands, we can see that every crease, wrinkle and vein is brilliantly resolved.

The Q80T also combines a neutral colour temperature with the ability to produce real vibrancy, and that’s strikingly effective with this film and its broadly cool palette. The abundant greys are just as miserable and washed out as they should be, but the flashes of colour – Sapper Morton’s shiny red gloves, the holographic billboards of central LA, the flashing lights of K’s flying car – all punch through the murky gloom beautifully.

There are rare occasions when playing an HDR video that the Samsung’s vibrancy seems a touch exaggerated – Luv looks a little artificially rosy when she enters Niander Wallace’s yellow-lit chamber – but, overall, the Q80T’s approach to colour is one of its greatest strengths.

Blade Runner 2049 contains some stern tests of motion handling, and the Q80T proves a dab hand here, too. With our chosen Custom setting, judder and blur are kept in check without any shimmer or artificiality being introduced. While some sets introduce jiggle to the distant lights as K flies to Sapper’s farm, they remain solidly in place on the Samsung. The Sony KD-49XH9505 that we recently reviewed (and which isn't currently available in Australia) offers even better motion processing, and we’d expect the 55in version (the KD-55X9500H) to be at least as good in this regard, but Samsung is now much closer to Sony in this area than it has been before.

Shifting from 4K HDR to Full HD SDR with Aliens on Blu-ray, the Q80T continues to impress. Some more tweaks are necessary here: drop Sharpness and Shadow Detail by a few points, and switch both Local Dimming and Contrast Enhancer to High. The resulting picture combines punchy highlights with deep, decently detailed blacks, and authentically delivers the clinical coolness of the retro sci-fi sets. There are no moments at all that we feel the colours are off.

Our only issue here is that the grain is a little too pronounced. You can fix it by switching on Noise Reduction or reducing Sharpness further, but the former introduces a bit of smearing to faces as characters move their heads and the latter results in a softer picture than is ideal. Films with this much grain are pretty rare these days, and you don’t want to get rid of it entirely anyway, but some TVs strike a better balance than the Q80T.

Drop down to standard-def, whether from a streaming service, DVD or the onboard tuner, and the image is still good, with the colour balance again coming up trumps by not exaggerating anything that a lesser model might. There’s a fair bit of fizz around moving objects and people, particularly when the incoming signal is of a particularly low quality, but the image is perfectly watchable.

The Q80T is the lowest model in Samsung’s 2020 TV range to get the company’s new Object Tracking Sound technology, which uses extra drivers to create a more spacious and involving sound stage. While the Q95T has eight drivers, this cheaper model has six: two mid-range drivers and two woofers along the bottom, and two extra drivers at the top.

The effort Samsung has put in here has paid off. The Q80T sounds solid and the degree to which the sound isn’t restricted to the TV is impressive. There’s no surround effect as such (nor would you expect one), but the bullets fired at K’s car in Blade Runner 2049 emerge into the room satisfyingly. It’s a significantly more open and solid sound than expected at this price, particularly from a TV with more or less invisible speakers, and that makes for an engaging delivery.

There’s good tonal balance, too. The surprisingly deep bass is thankfully free of the artificiality that’s common of TVs with small drivers, the midrange is clear and naturally weighted, and the treble is rounded off enough to avoid harshness. That said, we would avoid the Adaptive Volume feature, which introduces a little fuzz to proceedings. Adaptive Sound+ is definitely worth using, though, as everything sounds quite small-scale without it.

Of course, while the Q80T sounds good for a TV, particularly one at this level, it can only do so much, and a picture performance as good as this should really be partnered with a capable soundbar at least. You’ll get benefits across the board, but dynamics will be particularly improved.

While Samsung’s approach to its 2020 model numbers is off-putting, the Q80T’s performance is anything but. It’s the first mid-range 55-incher that we’ve seen this year, but it sets a formidable benchmark thanks to its dynamic and solid picture, substantial sound and typically exhaustive app selection.

Nothing’s unbeatable, of course, and we’re looking forward to putting the Q80T up against the Sony KD-55X9500H and LG OLED55CX in particular, but we’d be surprised if it wasn’t in the running for an Award when the time comes.