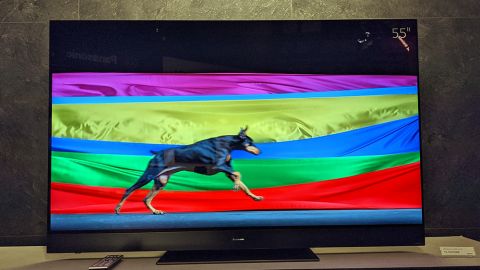 While 8K, MicroLED and concept TVs are often spectacular to see at CES, and of course are of great value to innovation in the TV industry, we can't help but admire Panasonic's contentment to stick to its 4K OLED TV guns.

While Samsung, LG and Sony have collectively rolled out next-gen 8K TVs and futuristic, high-end takes on OLED at the world's biggest tech show, Panasonic has, much like at CES 2019, unveiled only one TV – this time, the flagship Panasonic HZ2000 OLED TV.

And that’s OK. It’s OK because Panasonic is making ‘here and now’ TVs, one of which – the 2019 flagship GZ2000 – just happens to be the best 4K OLED around right now. The Panasonic HZ2000 promises to be even better, which sounds pretty good to us.

If it ain’t broke don’t fix it, they say – which is why the new Panasonic flagship TV is more of an evolution than a revolution. Panasonic’s message is very similar to last year: this top-tier TV promises to deliver Hollywood to your home.

The HZ2000 introduces the next generation of Panasonic’s custom-made Master HDR OLED Professional Edition panel, as well as an improved version of its HCX Pro Intelligent processor. The GZ1000’s seven-speaker sound system with upward-firing, Dolby Atmos-compatible drivers returns in a slightly modified way, too. That already bodes well for the performance of the HZ2000, but perhaps the headline news lies in the all-new picture technologies it’s supporting.

There are two in particular dominating the TV headlines at CES, Dolby Vision IQ and Filmmaker Mode – and Panasonic has pledged support for both. In fact, according to Panasonic, the HZ2000 will be only “one of a handful of TVs in 2020” that does support both.

Dolby Vision IQ, created by Dolby of course, is designed to optimise the playback of Dolby Vision content according to the lighting conditions of your room. So whether you’re watching TV in a pitch-black room or a well-lit room you’ll be getting an equally excellent experience.

By supporting Dolby Vision IQ, the TV reads the Dolby Vision metadata of the title being played, uses an external sensor to measure the surrounding ambient light, and adjusts the picture accordingly. While you’d be forgiven for being sceptical that such trickery isn’t skewing the picture, our first impressions of the technology are positive.

In Panasonic’s brief demo of the technology at work, a darkly-lit scene in Jordan Peele’s Us, viewed in a bright room, looks better on the HZ2000 than it does on the GZ2000. The woods, the car parked within them, and Lupita Nyong'o’s clothing, are indeed clearer – like they’ve been given a slight lift.

Such living room brightness democracy has also been strived for by Panasonic itself in relation to the UHD Alliance’s all-new Filmmaker Mode, which essentially overrides a TV's processing, such as motion smoothing and detail enhancement, and promises to deliver the cinematic experience intended by the director.

Panasonic has added its two penneth to further enhance the TV viewing mode in the form of what it calls “Intelligent Sensing”, which, like Dolby Vision IQ but for SDR and other HDR-formatted content, dynamically adjusts the luminance level of the picture based on the ambient lighting detected around the TV.

In a CES briefing Panasonic referenced the 28th April 2019 as a significant date in its decision to embark on Intelligent Sensing, for that was when the Game of Thrones finale aired – and immediately came under fire for looking too dark. Again, Panasonic’s demo suggested this new technology is worthwhile as clarity and general watchability was superior on the HZ2000 when light was shined around the TVs.

Note that while some TV manufacturers are opting for automatic activation of Filmmaker Mode on its TVs, Panasonic has chosen manual implementation. The owner can therefore turn it on and off via the remote's dedicated button (pictured, below).

With OLED’s weakness arguably its peak brightness potential next to that of Quantum Dot LCD panels, we’re pleased to hear Panasonic has squeezed a 20 per cent higher peak brightness into the HZ2000 – although it won't put more specific figures on that other than "over 1000 nits".

While we naturally have to take TV brand-controlled demos with a pinch of salt, next to a 2019 ‘competitor’ OLED TV the GZ2000 did communicate a wider dynamic range – the brightest highlights in wave splashes did indeed appear brighter. This can only be a good thing for its HDR delivery, which we should probably mention supports HDR10, HDR10+, Dolby Vision and Hybrid Log Gamma – just like Pana's 2019 OLEDs.

Fewer developments have been made in the sound department, but when you already have a comprehensive TV sound system to use, does that really matter? Like last year's GZ2000, the new flagship sports a 140-watt configuration comprised of a midrange/tweeter and double woofer/passive radiator on each bottom side, a centre speaker in the bottom middle, and two upward-firing Atmos speakers at the top. The only difference, we’re told, is slightly improved tuning by Technics this time round.

Considering the sonic achievements of the GZ2000 – “by the standards of a TV sound system, this is mighty impressive,” as we said in our review – there’s no reason to suggest the GZ2000’s won’t be at least every bit as satisfying.

The Panasonic HZ2000 flagship OLED TV for 2020 may not be the most aesthetically pleasing top-tier TV out there with its rather functional-over-fancy design, but it looks the part where it counts most: the picture on the screen.

With hardware advancements and the promise of new processing technologies alluding to not only Panasonic's best-ever OLED picture but also its most versatile and practical, the HZ2000 looks well set to continue the company's fine OLED form. And that sounds very exciting indeed. We look forward to getting the TV in for a full review later in the year.