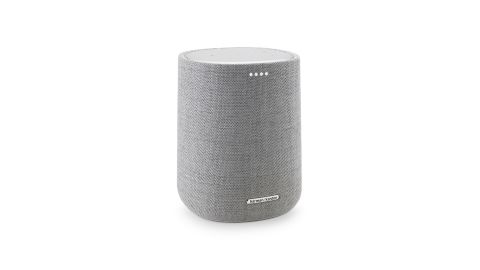 The Harman Kardon Citation One MkII shares the sonic character of every other speaker we’ve heard in the range, and that’s not a bad thing

If you’ve already heard one of Harman Kardon’s Citation speakers, or read one of our reviews, feel free to skip the sound section. Even Vincent van Gogh could tell that the Citation One MkII sounds like every one of its family members. And he died 130 years ago.

However, we’re assuming you’ll still want to stick around to find out what this thing can do – we certainly did. Although we've previously tested a few of the Citation One’s bigger brothers, we never put this particular model through its paces, and we’re already onto its second generation.

While sharing the same general aesthetic as the rest of the range – including its dirt-repellent and flame-retardant blended wool fabric covering – it is really not that dissimilar to many one-box smart speakers around this price.

You can pay a small premium for a blue or pink version, but the price quoted here is for the basic black or grey models.

Inside is a single 20mm tweeter and accompanying 9cm woofer – both forward-firing, with a bass radiator to the rear – and Harman Kardon backs its promise of room-filling sound when driven by the built-in 40W of amplification.

Those who prefer their music in stereo can now also pair the Citation One with another of the same model, which is something introduced with this MkII version. Those with an original model can pair it with this version, too.

There is little else to mention about the physical design of the unit, apart from the touch-sensitive controls on its crown – for volume, Bluetooth pairing, microphone usage and a multi-use button for music playback and stopping the alarm – and the fact that, at 2kg, it feels pleasantly weighty for the size.

Set-up is done through the Google Home app, as with Harman Kardon’s other Citation products. It is straightforward enough – a benefit of using an established multi-room platform rather than creating a proprietary substandard one.

Once set up, however, you don’t necessarily need to use a second device to control it, thanks to the on-board mic and Google Assistant. One potential concern might be the lack of wired internet port, which means your wi-fi signal will have to be consistently strong, but this is probably less of a concern here than it was for the top-of-the-line, floorstanding, 19kg Citation Towers.

Bluetooth and Apple AirPlay 2 are also included – the latter is a new addition for the Citation One MkII – but there is no physical input, so those looking for something into which they can plug an old iPod or the like will be best off looking elsewhere.

File support is comprehensive, with the Citation One able to play MP3, WAV, FLAC, HE-AAC, LC-AAC, Vorbis and Opus formats.

Harman Kardon also promises improved software, but, without having spent time with the first generation, we can’t vouch for how much of a difference that has made.

What we can say is that Harman Kardon hasn’t altered this speaker’s character, from what we’ve heard across the rest of the Citation range. That means it boasts a big sound that isn’t shy to grab you by the hand and force you onto your feet, but it also remains a smooth and relatively easy listen all the way.

A lot of that big sound comes from the bass, which is full but also a bit soft and a touch boomy. This is unlikely to concern a sizeable portion of Harman Kardon’s target market, but it means that the Citation One requires careful placement to avoid any bass issues.

Detail isn’t bad, either – again, not class-leading, but not far off for this type of smart speaker in this area of the market. There will be plenty of people willing to sacrifice a bit of textural insight in receipt of that enthusiasm and punch.

Our main issue is that that excitement tends to be a tad superficial, with booming kick drums betrayed by a slight lack of timing and dynamic expression. It sometimes feels as though the Citation One is shouting words it doesn’t truly mean.

While the Citation One MkII isn’t the best small smart speaker on the market, it is still difficult not to find it likeable. Certainly, it could be better, but there is nothing offensive about its presentation. The performance is good enough across the board for it to be a generally enjoyable listen.

What’s more, if Google Assistant is your weapon of choice, then there aren’t really any competitors of this type and at this price that can truly put the Citation One to shame. The bottom line is that if you like what you’ve heard from any of the Citation speakers before now, you can buy the Citation One with confidence.