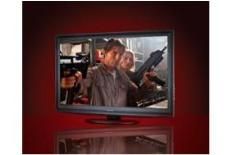 This is a fine LCD from the plasma king, but read further, and you will see that you can buy even better

Of all the TV manufacturers out there, Panasonic is easily the one most committed to plasma.

The likes of LG and Samsung produce the odd example, but their output is heavily biased towards LCD.

Panasonic shows no signs of switching its balance, but it is now producing LCD sets – and with success: the TX-L32D25 took a Supertest win recently.

That was Panasonic's first TV gong of 2010, and although this 42in version doesn't quite repeat that success, it's still a mighty fine television.

Backlight tweakery required
Like its smaller sibling, the TX-L42D25 has an LED edge backlight, but it doesn't result in the same kind of slimness that others with the same technology achieve.

Still, it's a fairly attractive and extremely well-made unit. Set to the ‘home' mode, the Contrast Automatic Tracking System produces a rather dull, flat picture; yet, turn it off and the backlight's ramped up to the max, reducing blacks and revealing a smidge of bleed from the LEDs.

Our solution? Simply turn the backlight down to under a quarter before completing the usual THX Optimizer setup.

However, while this results in the best combination of black depth and white punch, The Dark Knight on Blu-ray proves that the ‘D25 can't go quite as deep as its ultra-inky rivals.

Still, there's lots of white punch, and the blacks it does have are exceptionally insightful, which ensures you're able to see all of the fast-paced action in the dark corners of Gotham City.

In fact, details levels across the board are extremely impressive, resulting in excellent texture and depth to pictures, and an extra degree of definition to the Joker's sinister scars.

It's a touch too pale on the ‘cool' setting, a touch too warm on ‘neutral'. It's far from a serious complaint, and many will get on fine with one of these options, but it's only right to point out that it can't quite match its closest big-name rivals for neutrality.

What the ‘D25 does have over the bulk of its peers at this price is a Freesat tuner, which, considering the extra solidity and vibrancy it offers over Freeview, especially in HD, is quite a boon.

And it will upscale standard-definition, too, of course. Pictures from DVD demonstrate similar traits to Blu-ray: lots (though obviously less) of detail, insight into blacks, and overall punch.

Good sound for a flatscreen
Panasonics often have fairly decent sound, and the ‘D25 is no exception.

Turn the faux-surround modes off and you get a performance that, by flatscreen standards, is decently weighty and punchy.

The last thing to point out is that the Viera Cast internet service now includes the Acetrax video-on-demand service which allows you torent or buy films.

For now, though, while the ‘D25 gets close to the top of the pile, it doesn't quite reach the summit.