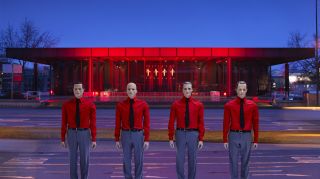 A handful of Kraftwerk releases will hit music streaming services for the first time from 3rd July – and it's good news for Kraftwerk fans who subscribe to Tidal Hi-Fi or Amazon Music HD,as some will be available as Dolby Atmos Music mixes.

The ‘first time on digital’ releases include a Dolby Atmos/HD Surround mix of the electronic group's Grammy Award-winning documentary 3-D The Catalogue (2017), which will be available on Amazon Music HD and Tidal from that July date.

The original German-language versions of five Kraftwerk studio albums - Trans Europa Express, Die Mensch-Maschine, Computerwelt, Techno Pop and The Mix. Autobahn, Radio-Activity/Radio-Activität and Tour De France - will also be available to stream and download worldwide for the first time, marking the first time they've been released outside of Germany, Switzerland and Austria.

Atmos Music mixes utilise Dolby's object-based surround sound technology, which started life in the cinema, to create a precise and immersive audio experience that makes use of height channels, for a more immersive experience. So if you're a Kraftwerk fan who subscribes to Tidal Hi-Fi or Amazon Music HD, and owns a Dolby Atmos music system, we'd say you're in for a pretty big treat.