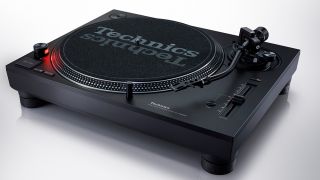 Technics is getting back in the DJ game with the launch of a new addition to its legendary turntable range. The new SL-1200 MK7 (also available as an SL-1210 MK7 in matte black) is the first deck aimed squarely at the DJ market in nine years, and the first since the relaunch of the Technics brand in 2014. It launches alongside a new SL-1500C hi-fi turntable.

The new SL-1200 MK7 promises to keep the bombproof design and reliability that has made it an industry standard for DJs since the 1970s, while adding new features such as reverse playback, as well as upgrades to the performance and sound quality. The new SL-1210 MK7 is joined by a new SL1500C hi-fi turntable, also being launched at this year's CES.

Technics launched the SL-1200 Series back in 1972, and it quickly found favour with audiophiles and DJs alike thanks to its ease of use and direct drive design. Panasonic ceased production in 2010, having ended on the SL-1200 MK6 model, before resurrecting Technics turntables in 2016 with the launch of the high-end SL-1200G and SL-1200GAE. They were followed by the SL-1200GR in 2017.

But all those new turntables were aimed squarely at the high-end hi-fi market - with the prices to match. This MK7 SL-1200/SL-1210 is the first new Technics deck to come with a more affordable price and with the DJ in mind (though we're sure it will appeal to plenty of people wanting to simply play vinyl, too).

So, what's new? The SL-1200 preferred to focus on form and function over features and that pretty much remains the case here. There is the addition of Reverse Play, which appeared on rival DJ decks but never made it across to Technics until now, but otherwise it's all about the internal upgrades.

There's a new coreless direct drive motor, which aims to eradicate any irregularity to the rotation, and components have been improved to match the high torque performance of previous generations. Technics has used motor control technology developed for Panasonic Blu-ray players to ensure that rotation is consistent and the decks respond to stop/start and scratching.

The S-shape tonearm returns, made of lightweight, high-rigidity aluminium, and there's a white LED stylus illuminator, which claims improved visibility of the stylus tip. A two-layer platter with deadening rubber and aluminium promises a resonance-free base for your records, while the chassis comprises aluminium and ABS mixed with glass fibre for a solid, vibration-free cabinet.

The SL-1200MK7 comes in an all-black matte design, with black buttons and tonearm and a choice of red or blue LED light.

The history of Technics, by the man who helped shape it