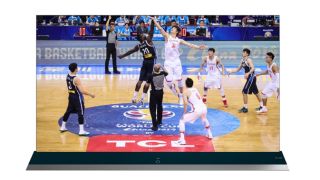 The world’s third-largest TV manufacturer used IFA 2018 to announce a new, customised flagship 8K model from TCL’s global partnership with FIBA (the International Basketball Federation) - which it no doubt hopes will be a slam dunk in the US market.

After announcing its official entrance into the UK market last month, a FIBA-less version of the 8K TV should reach European shores sometime next year.

The 8K QLED TV comes in just one size: 75in. It uses a Quantum Dot display with wide colour gamut and 1000-nit peak brightness, and features 832 local dimming zones designed to allow for precise backlight control.

On paper at least, the numbers look good to make the most out of HDR content, of which the 8K TV supports HDR10 and Dolby Vision flavours.

TCL hasn’t only prioritised picture quality, however. Aiming to deliver the whole package, the 8K model features a sound solution by Onkyo, support for ‘virtual’ Dolby Atmos, and an ‘AI’ feature that allows the speaker to work even when the TV is turned off.

Those audio features are also shared by TCL’s latest 4K QLED TV, the TV X8 (pictured above), which the Chinese manufacturer also announced at IFA.

The Quantum Dot display (with wide colour gamut) supports HDR10 and Dolby Vision too, and is available in 75in, 65in and 55in variants.

Like Samsung with The Frame and Toshiba with its forthcoming Wall Art set, TCL has, last but not least, also announced the Living Window: a range of lifestyle 4K QLED TVs that are designed to act as pieces of art when they’re not performing traditional TV duties.

The Art Deco, Abstract Beauty, Modern Simplicity and Oriental Elegance models – inspired by Art Deco, Cubism, Piet Mondrian and Oriental art – come with a ‘Home Gallery’ that can display images from a library of ancient and modern Chinese and foreign paintings.

They are available in 65in, with the exception of the 55in Oriental elegance.

The Living Window TVs also feature Onkyo and virtual Dolby Atmos audio, Dolby Vision support, and an AI, voice-controlled OS that can coordinate everything from music and video playback to alarms and weather reports, to traffic alerts and personal schedules.

TCL’s IFA press conference acted as a good heads-up of what we can expect from the brand next year. Now all we can do is hold tight for TCL to reveal availability and pricing information…