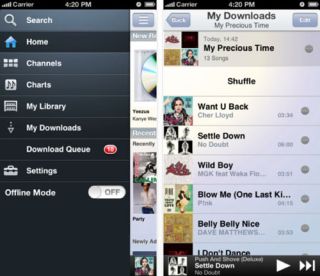 The Sony Music Unlimited app for iPhone and iPod touch is being rolled out across new markets today, and now supports offline playback and higher quality music files.

The Sony Music Unlimited app now allows subscribers to download playlists, albums and individual songs, allowing you to listen to music when you're not connected to a cellular or WiFi network.

Offline playback has become a key feature on streaming music apps, and is available on the likes or Napster, Rdio and Spotify, too.

Originally launched in 2010, the cloud-based digital music service, powered by Omnifone, hosts over 20 million songs and is available on Android and iOS devices, with the Android app already offering offline listening.

Sony recently cut the Music Unlimited price in the wake of the PS4 launch, with Sony looking to push its own streaming music service to PlayStation users.