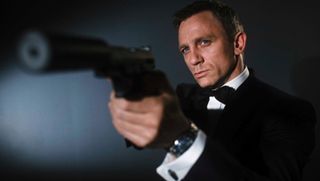 Sky Movies HD has today confirmed the launch of Sky Movies 007 HD channel dedicated to the full back catalogue of James Bond films.

The full back catalogue of films will be shown uninterrupted for the first time throughout October, with the channel launching on October 5th.

Sky Movies 007 HD launches to coincide with the 50th anniversary of the franchise, with the first film, DR NO, released on October 5th 1962.

James Bond on Sky won't be interrupted by adverts either, thanks to Sky's insistence on keeping its films ad-free.

You'll also be able to watch the channel on Sky Anytime+ and on-demand on Sky Go, including on mobile devices.

In addition, customers who subscribe to Sky Movies via NOW TV, the brand new internet TV service from Sky, will also be able to enjoy entire the Bond catalogue.

You can read our original story on Sky 007 HD channel below.

Sky has sealed a deal to show the entire James Bond film catalogue from MGM will be available to watch on Sky Movies HD from October 2012.

Twenty-two official Bond films from Dr No to Quantum of Solace will be shown on Sky Movies Showcase HD, while the new Bond film Skyfall, due out in cinemas in October, will will come to Sky in spring 2013.

The twenty-two films from EON Productions will also be joined by the two non-EON titles, the 1967 version of Casino Royale and Never Say Never Again, which will also be available to watch.

All the films will be shown on Sky Movies Showcase HD, marking the first time the complete catalogue of James Bond films will have been shown uninterrupted and in HD in the UK.

The films will also be available to watch on-demand and on the go, says Sky.

Ian Lewis, Director of Sky Movies, said: “We are simply delighted to have secured the Bond films for our customers. Everything about these films is iconic – whether it’s the cars, the gadgets or the catchphrases.

"What’s more, they’ve become hugely significant culturally; demonstrating the best of British film. It’s an honour for us to have all of them for our customers, and we will ensure that we do them justice across Sky Movies, giving our customers the best possible experience in watching them. It’s an exciting time for Sky Movies and this is just one of many exciting plans we have coming up in the months ahead.”

Chris Ottinger, President, International Television Distribution & Acquisitions, MGM said, “It is the first time that the entire Bond collection will be shown side-by-side on one channel and we are really pleased to be able to showcase all of the British classics on Sky Movies.”