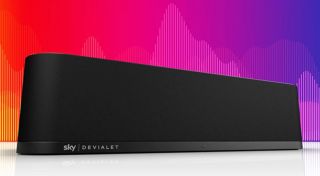 Ubiquitous satellite broadcaster Sky and French high-end/high-concept brand Devialet have announced the fruits of their brand-new partnership: the Sky Soundbox.

The Soundbox is a well-specified soundbar: Bluetooth connectivity, a digital optical input, and HDMI in and out are all included. Sound is delivered by three 2in full-range drivers, reinforced by six 3in woofers.

But though Sky has announced Dolby Atmos will be arriving on Sky Q "later this summer" - and in time for the start of the Premier League season, we understand - we're told the Soundbox "won't support Atmos", despite Dolby Audio on board.

Sky is taking orders for the Soundbox at its website right now. It's priced at £800, though existing Sky subscribers can pay £300 and Sky Q customers (new or existing) need stump up only £250.

As far as Devialet is concerned, the partnership will bring the company to much wider mainstream attention. Until now Devialet has been known for far more esoteric (and expensive) electronics - and some very worthy adventures in the land of rare recordings.

What is Ultra HD and 4K TV? Everything you need to know